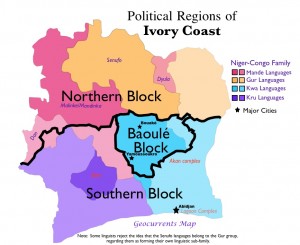 According to most reports, Ivory Coast is slowly returning to normal. On May 6, 2011, Alassane Ouattara was sworn into office by Constitutional Council President Paul Yao N’Dre, a close associate of deposed leader Laurent Gbagbo. N’Dre, not surprisingly, called for national reconciliation. Although he was heckled at times, the event generally proceeded smoothly. A day before, news reports indicated that the “last” of Gbagbo’s loyalist militias had been eliminated, its naval base seized. Business concerns are increasingly optimistic that mining and agricultural exports will pick back up—although there is concern that neighboring Ghana will supplant Ivory Coast as the world’s top cacao producer.

Economic reconstruction will take time, as war-damage was considerable, and ethnic reconciliation may not come easily either. Both sides accuse the other of committing atrocities, and with good evidence. Ouattara’s forces are accused of attacking a Baptist church in which as many as 2,500 displaced persons had sought sanctuary. In Abidjan and environs, victims of Gbagbo’s militias are being exhumed. On May 9, sixty-eight bodies were discovered in mass graves on a soccer field, allegedly targeted for belonging to the Baoulé and Dyula ethnic groups, which had supported Ouattara in the recent election.

Those optimistic about Ivory Coast’s future often point to the stability and prosperity experienced under the government of founding president Félix Houphouët-Boigny (1960 to 1993). Yet by the end of that period, the country was economically reeling and beset by ethnic tensions. After Houphouët-Boigny’s death, National Assembly president Henri Bédié outmaneuvered Prime Minister Alassane Ouattara in a struggle for the presidency. Bédié rejected the pro-immigration stance of his predecessor, a fellow Baoulé, pushing instead the ideology of Ivoirité, designed to restrict the rights of the immigrant community. Under new rules, those whose parents were not born in Ivory Coast—such as Ouattara—were not eligible for the presidency. Bédié’s term was marked by economic decline and rampant corruption, provoking a military coup in 1999 that installed Robert Guéï as president. In the presidential election held the next year, Ouattara was still excluded. Laurent Gbagbo, of the previously somewhat marginal Bété ethnic group, won the contest, but Guéï refused to honor the results. In the end, street protests brought Gbagbo to power. With Ouattara demanding a new and open presidential contest, northerners widely boycotted a parliamentary election later in 2000. Gbagbo’s victory did not merely anger northern supporters of Ouattara. The Baoulé, previously the politically dominant Ivorian group, were also displeased with the Gbagbo regime, reflecting Baoulé-Bété tension over land rights in southwestern Ivory Coast. 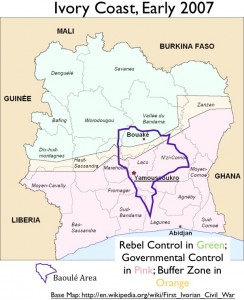 At the end of the millennium, the political situation in Ivory Coast was spiraling out of control, but the decisive break did not come until September 2002, when northern troops mutinied, demanding an end to the doctrine of Ivoirité. The rebelling troops soon gained control of the entire northern half of the country, basing themselves in Bouaké, located in the northern Baoulé region. The Baoulé zone was itself split by the war, as the government remained centered in Yamoussoukro, Houphouët-Boigny’s natal village that had been transformed into the national capital. A U.N.-mandated, French-enforced buffer zone (zone de confiance) soon stretched across the country, cutting through Baoulé territory between the rival capitals. 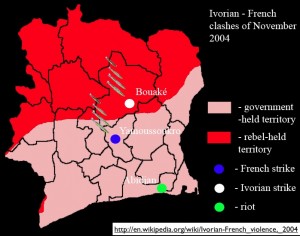 French peacekeepers were themselves eventually drawn into the fighting. Both sides mistrusted French intentions, but the break occurred with the governmental forces. In 2004, Gbagbo ordered an aerial bombardment of the rebel capital of Bouaké, during which a French base was also bombed, killing nine French troops and injuring more than thirty. The Ivorian government claimed that the assault was accidental, but France disagreed. In response, it destroyed the Ivorian air force. Anti-French riots then broke out in Abidjan, provoking another French military response, which took twenty to sixty Ivorian lives. Although Paris reestablished normal relations with the Ivorian government after the official end of the Civil War in 2007, relations with the Gbagbo regime remained icy. Anti-French rhetoric played a significant role in Gbagbo’s unsuccessful 2010 re-election bid. Gbagbo’s subsequent downfall intensified anti-French sentiments across most of southern Ivory Coast—and in neighboring Ghana as well. Critics accuse France of playing a neo-colonial role, manipulating Ivorian politics for its own benefit; supporters counter that French forces have sought only to maintain order by allowing the will of the Ivorian people to be realized.

Ivory Coast continues to face major challenges. Suspicions run deep, and impartial arbiters—whether Ivorian or foreign—are not easily found. Although Ouattara did win the election, it is important to recall that he received just thirty-two percent of the vote in the first round, as opposed to Gbagbo’s thirty-eight percent; in that contest, both candidates were rejected by the powerful Baoulé block in favor of its own favorite son, former president Henri Bédié. Although the Baoulé districts voted for Ouattara in the final round, support remained hesitant and dissatisfaction runs deep. If Ivory Coast is to successfully rebuild its economy, some degree of ethnic reconciliation will be necessary. Whether it is achievable remains to be seen.  Much depends on the evolving attitudes of the Baoulé, the ethnic group that once dominated the country, and which today occupies the middle ground between Ivory Coast’s Muslim-majority north and its Christian-majority south.