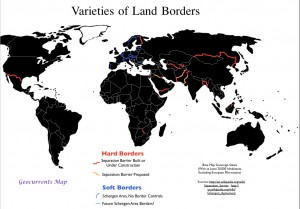 On the standard world political map, all boundaries between sovereign states are the same, simple lines separating one country from another. In actuality, borders vary tremendously. The four-kilometer-wide “demilitarized zone”— sandwiched between two hyper-militarized zones—that splits North from South Koreas does not even remotely resemble the stroll-over border between Germany and France. Such border disparities have increased in recent decades. Europe has seen a massive softening of borders; first the Iron Curtain dissolved, then the Schengen Agreement allowed control-free movement across most state lines. In the Middle East, Central Asia, South Asia, and elsewhere, borders have hardened in the same period, marked by the massive construction of “separation barriers.” Some of these barricades are designed to prevent the infiltration of militants; others to staunch the movement of immigrants.

GeoCurrents will examine recently fortified borders over the next week or so. Today’s post focuses on the global distribution of exceptional borders, hard and soft. The map depicts the extremes of free movement and fortification. In blue are the international boundaries within the Schengen area, with lighter blue showing Schengenland’s planned expansion to encompass Romania and Bulgaria. Red shows barricaded borders, existing and under construction. Serious proposals for new barriers are depicted in orange.

The map is not comprehensive. Maritime borders are ignored, as are land boundaries too small to be seen on a map of this scale. Heavily fortified borders thus excluded include those separating Israel from Lebanon, Gaza from Egypt, Northern Cyprus from the rest of the island,* and the Spanish exclaves of Ceuta and Melilla from Morocco. Hard barriers within sovereign states, such as that between Hong Kong and China proper, are also excluded, as are those that do not correspond with internationally recognized boundaries, such as the “Moroccan Wall” in Western Sahara. I have also excluded the barrier between South Africa and Mozambique, as it is slated for demolition.

It quite possible that other hard borders, existing and proposed, have not been given their due. The map’s source material is limited to the Wikipedia article entitled “Separation Barrier”; the article is informative, but is marred by discrepancies between its text and its table. The only Russian entry in the impressive table listing “current barriers” is the proposed divide between Russia and Chechnya, excluded from the GeoCurrents map because it is internal to the Russian state. Yet the article notes the existence of “a security barrier … on the border of Russia with Norway, Finland, China, Mongolia and North Korea.” No other information is provided; the linked Wikipedia article is in Russian, hence inaccessible to me. Combining the two sources, I have mapped these Russian borders as “hard.”

The mapping of “soft borders” is also tentative. The GeoCurrents map merely follows the internal boundaries within the Schengen area, noting as well planned expansions f the zone. Yet other international boundaries also have certain soft features. Until recently, one was very open; the United Kingdom and the Republic of Ireland long formed a “common travel area” with “minimal or non-existent border controls.” Such openness, however, is evidently vanishing. As reported in a 2007 Sunday Times article:

The free movement of people between Ireland and Britain has survived centuries of tension and even terrorism, but that tradition is about to end with the severing of a special relationship between the two countries because of tighter security procedures. Bertie Ahern, the Irish Prime Minister, confirmed in the Dáil yesterday that the Common Travel Area – which was created between the Republic of Ireland and the UK after independence – is to be dismantled with the construction of an electronic border control system by Britain by 2009. Mr Ahern said that it was now only sensible for the Republic to follow Britain’s example and introduce similar security.

As always, I welcome comments on the accuracy of the map. Subsequent posts will examine in detail specific barricaded borders, beginning with that separating Iran from Pakistan. This barrier divides not only two different countries, but also a single major ethnic group, the Baloch.

*Northern Cyprus, moreover, is not an internationally recognized state, as it receives recognition only from Turkey