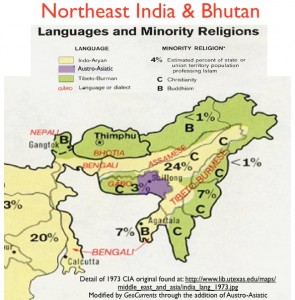 The small Indian state of Tripura was until recently beleaguered by insurgency, much like its neighbors in northeastern India. South Asia Terrorism Portal lists one active terrorist/insurgent group, two proscribed groups, and twenty-two inactive ones. Most have championed indigenous claims to land and autonomy, opposing the Bengali migration that has transformed the state. The All Tripura Tiger Force (ATTF) seeks the expulsion of “all Bengali-speaking settlers settled in Tripura after 1956.” Other groups have demanded more, aiming for full independence. The ethnic and religious diversity of Tripura has contributed to the proliferation of insurgent bands. ATTF membership is supposedly 90 percent Hindu, whereas that of the rival National Liberation Front of Tripura (NLFT) is largely Christian. Religious tensions have led to further splintering. The NLFT split in 2001 due to allegations of “forcible conversion of tribal cadres/civilians to Christianity” as well as the “lavish lifestyles led by the senior leadership.”

The indigenous peoples of Tripura do not monopolize political violence in the state. The Bengali community has given rise to its own militant group, the United Bengali Liberation Front (UBLF), currently considered inactive. Formed in 1999, the UBLF seems to have specialized in the targeted assassination of tribal leaders. Although not banned by India, it is proscribed by Tripura’s government. The UBLF is reported to have “raised funds from the Kolkata [Calcutta]-based business groups, dealing in tea, rubber, timber and construction work in Tripura,” and to have “extorted money from State government employees.” 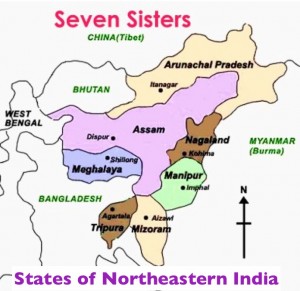 Unlike the UBLF, the tribal insurgent groups of Tripura have not had access to the funds of Kolkata-based business concerns. They have turned instead to other sources of funding, some quite odious. In 2005, the BBC reported that the National Liberation Front of Tripura (NLFT) was peddling pornography, filming captured “tribal women, and some men.” Dubbed into Thai, Burmese, Bengali, and Hindi, the pornographic films were geared to a wide audience. Unedited stock footage shows “boys standing around with automatic rifles and revolvers pulling in girls.” The BBC report claims that sexual abuse has been rife in the NLFT. Insurgent groups active elsewhere in the region have also turned to commercial sex as a source of funding, although not without fierce local opposition. In Manipur, rebels have supposedly shot pornography producers in the legs.

The chronic unrest in northeastern India highlights several conceptual issues. To begin with, it shows the inadequacy of the basic vocabulary used to discuss the conflict. The preceding paragraphs have followed convention in labeling all of the indigenous peoples of Tipura as “tribal.” Little is gained, however, in using this wildly elastic category. In the Middle East and North Africa, a tribe is an aggregation of people who claim descent from a common ancestor. Tribes of this sort run parallel to the state; while usually co-opted by it, they occasionally take it over. Such groups need not be linguistically or religiously distinctive, even though they may band together in competition with other descent groups. In South and Southeast Asia, by contrast, a tribe is a distinctive ethno-linguistic group that has historically resisted the pull of the political center; in this context, the tribe is, historically speaking, the antithesis of the state. South and Southeast Asian tribes are now enveloped by modern countries, but such incorporation is imposed upon them, running counter to tribal institutions. Tribes of this sort are usually religiously distinct from their non-tribal neighbors.  Some still practice local forms of animism; others have recently converted to a world religion, most often Christianity. Most lack an indigenous heritage of literacy.

Both meanings of “tribal” cover a significant range of internal variation as well. In northeastern India, many so-called tribes fit the second definition reasonably well, but others do not. Several of the more important northeastern groups have been organized at the state level for hundreds of years. Relatively centralized kingdom emerged among the Tripuri of Tripura, the Meitei of Manipur, and others. These societies wrote in their own languages, often in their own scripts. They also largely embraced Hinduism hundreds of years ago, albeit as interpreted though their own cultural lenses. The Kingdom of Manipur is sometimes said to date back almost 2,000 years, and in the 1700s its formidable cavalry posed a major threat to Burma and other powerful kingdoms.

Why then are the Tripuri and Meitei considered tribal? In northeastern India, it turns out, the tribal category encompasses all ethnic groups that were historically peripheral to South Asian culture. Speaking Tibeto-Burman or Austro-Asiatic languages, the “tribes” of the region are historically and culturally linked to the peoples of upland Southeast Asia and what is now south-central China. Historically speaking, most of these groups were politically decentralized, but a few developed states of their own. What they have in common is not political and social organization, but rather distance from Indian norms, resentment against incorporation into India, and anger over the influx of outsiders. 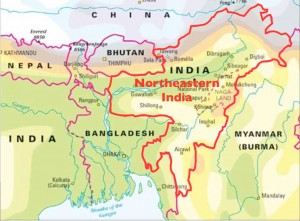 Northeastern India, although it is substantially larger than Bangladesh, tends to be invisible in the international media, barely registering in the public imagination. Partly this is a product of political unrest itself, as access by journalists and others has been severely restricted. But it is also a product of the way we map the world—and of the structures of academic institutions. Young scholars wanting to study an interstitial place like Tripura or Manipur would have a difficult time, first finding funding for their studies, and then finding a place within the scholarly communities of South Asian or Southeast Asian studies. It is in these hidden ways that our unexamined geographical conventions get in the way of understanding the world.