Mapping ISIS at the Institute For the Study of War

(Note: This post is by Evan Lewis, not Martin Lewis.)

ISIS has proven to be as difficult to conceptualize as it has been to counteract. It has defied easy classifications and has been misunderstood and underestimated repeatedly by most of its opponents, often with disastrous consequences. In the effort to understand ISIS, its tactics, strategies, goals, and weak points, no one is doing as thorough and as impressive of a job as The Institute for the Study of War, or ISW. The ISW staff has conducted a variety of research projects on conflicts ranging from Ukraine to Afghanistan, but their ISIS investigations are particularly impressive, both in their analysis and their array of detailed maps. We present here a set of ISW maps from the last few months depicting different elements of the global struggle against ISIS. To read the full ISW articles, please visit their website at www.understandingwar.org. 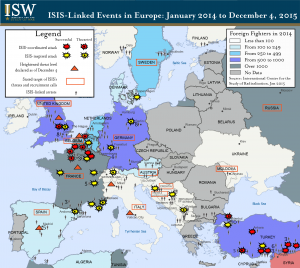 The first ISW map reproduced here depicts nearly a year’s worth of ISIS-directed terrorism in Europe, including both foiled attempts and successful attacks. While the color schemes might be unintuitive, the map conveys an impressive amount of information. The color of each country depicts the number of known local residents who have joined ISIS in Syria and Iraq. Note the high level of recruitment in France, Tunisia, and Russia (in the latter case, mostly from the Caucasus). The explosion icons fit into a four-fold matrix of attacks, indicating whether they were ISIS directed or merely ISIS inspired, and whether they were successful or not. As can be seen, attacks have been most heavily concentrated in northern France and southern Turkey. According to the information provided, Turkey has been notably unsuccessful in thwarting attacks. The map also depicts changes in national security status, countries that have been specifically mentioned by ISIS as targets, and every ISIS-linked arrest on record. The concentration of ISIS-related arrests in Turkey, England, Spain, southern France, and western Germany is noteworthy. All in all, this map impressively depicts Europe’s daunting security challenges. My main criticism is purely cartographic: most islands are not depicted as parts of the countries that they belong to.

The next ISW map, showing ISIS’s global strategy, is a fine example of macro-scale cartography, arresting for its simplicity. Unlike many ISW maps, it does not delve into details within countries and instead uses a simple three-layer, global approach. It depicts ISIS ambitions at their full extent rather then a realistic assessment of their present influence. The group’s heartland is portrayed as the red “interior ring,” which extends over not just Syria and Iraq but also Jordan, Lebanon, Israel, and the Palestinian territories. While the actual area of ISIS control within this zone is much more confined than what is depicted, it does represent a historically coherent region. This greater Syrian area also has profound ideological ramifications; the very title of the ISIS magazine, Dabiq, refers to a town in Syria that the group links to the culmination of human history. As noted in the Wikipedia:

In Islamic eschatology, it is believed that Dabiq is one of two possible locations for an epic battle between invading Christians and the defending Muslims which will result in a Muslim victory and mark the beginning of the end of the world. The Islamic State believes Dabiq is where an epic and decisive battle will take place with Christian forces of the West, and have named their online magazine after the village.

The second zone on this map covers the “near abroad” of ISIS ideology, an area that will prove crucial to any serious attempt to defeat the organization. Each black star here represents an official ISIS wilayat, a term that conventionally denotes a province or governorate, but which in practice refers more to the ISIS strategy of “franchising” and hence incorporating local jihadists. This map, from September 2015, depicts eight such governorates stretching from Algeria to Afghanistan and from Nigeria to the Caucasus. Experts at ISW think that ISIS will probably announce several new wilayats in the near future, based in Tunisia, Somalia, and Bangladesh, which would represent a dangerous expansion of its worldwide jihad. The map’s final category is the “far abroad” ring, which includes any country against which ISIS holds a grudge. In this region, the group seeks mainly to spread chaos, which it has achieved with marked success in several areas. 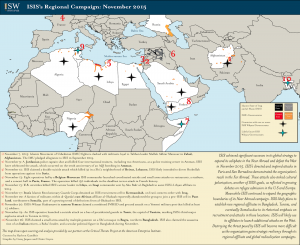 The next map from ISW provides an interesting contrast with the previous one by retaining a wide focus while simultaneously showing regional details. Many of the areas depicted as ISIS governorates are too small to be analyzed here, but what stands out is the dense web of ISIS activity in Iraq-Syria along with the wide distribution of small pockets of ISIS support throughout the region. Other characteristics of note include the band of ISIS control, depicted in red, in Libya, as well as pockets of support throughout the rest of northern Africa. Zones of “control” on this map indicate areas from which ISIS is able not only to launch attacks but also control territory and form rudimentary governments, regarded as true expansions of the caliphate. The only other control zone shown outside of the Levant and North Africa lies along the Afghan-Pakistan border, which is surrounded by a smattering of “support territories,” indicating that this is an area of potentially rapid ISIS expansion. This map also shows surprisingly large ISIS support territories in both northeastern Nigeria and the northeastern Caucasus, two zones far from the group’s heartland. Finally, the map shows with green stars areas in which ISIS might declare future governorates. Somalia is no surprise in this regard, as it has been a bastion of jihadism for years, but Tunisia and Bangladesh are both relatively well-governed states that, if destabilized by a sustained ISIS campaign, could have disastrous consequences for their respective regions. 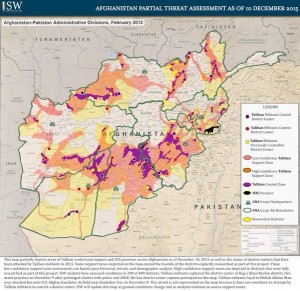 The next ISW map, depicting Afghanistan, is a fine example of the high resolution and detail that characterize the institute’s cartographic program. This map of Afghanistan is not specifically centered on ISIS, but it does depict the group’s presence as ominous black figures, visible in several scattered locations. The primary goal of this map is to show Taliban power and influence throughout the country, with ISW’s usual distinction of “control” and “support” zones. What jumps out from this map is the wide swath in which the Taliban has substantial support, although this is admittedly a vague term, as well as the fact that this zone almost encircles the entire country. The only large area in which no Taliban support is indicated is the highlands of central Afghanistan, dominated by the Shia Hazara people.

The map indicates that the main area of ISIS power in Afghanistan lies in Nangarhar Province along the border with Pakistan. Here ISIS fighters have been known to attack—and behead—Taliban militants. According to an October 15 article in The Diplomat:

In Nangarhar, even as Taliban and ISIS clashed, they continued fighting the government. The clashes between them and against the government have turned Nangarhar into a volatile province, with the Taliban dominating some parts, while others have an ISIS presence. Thousands of families have been displaced and violence has doubled. This indicates that although they are rivals, Taliban and ISIS could make gains in different regions, creating separate fiefdoms, while remaining enemies just like ISIS and Al-Nusra in Syria.

Overall, the Afghanistan map gives immediate clarity to the severity of the challenge facing the besieged Afghan government. It also highlights the difficulty of rooting out ISIS strongholds, which appear to be mostly ensconced in territories beyond the government’s control. The scale and intensity of the conflict can also be seen in the large number of district centers that have either changed hands or have been attacked recently, depicted as circles of various colors. All in all, this map illustrates a sobering but crucial theater of conflict that is often overshadowed by the struggles occurring in Syria and Iraq. 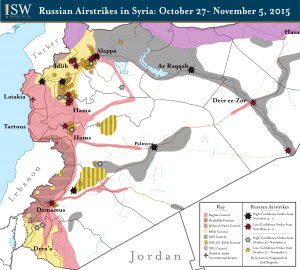 The final ISW map, depicting Syria, is highly detailed and serves a particular purpose. It starts with a depiction of Kurdish, government, rebel and ISIS territory, as well as contested grounds, over the more populated areas of Syria. An overlay shows the location of every observed Russian air strike in Syria over a nine-day period. The cartographer divides the strikes between those that can be pin-pointed with high confidence and those that cannot, also dividing the strikes between two separate temporal windows, one from October 27th to November 3rd and the other from November 4th to 5th.

This map is helpful in forming a mental image of the geography of the Syrian conflict, but more importantly for showing the true target of Russian attacks in Syria. Both the Syrian government and most rebels groups are largely concentrated in the west, the area of greatest population density, while the Kurds control a thin band along the Turkish border, leaving a huge swaths of eastern Syria largely in ISIS hands. This entire area of ISIS sway saw only a tiny fraction of Russian air strikes, the majority of which were located in areas controlled by the al-Nusra Front and other smaller rebel groups. (Although this map only covers a brief nine day window, the patterns present here are highly typical of Russian airstrikes, for which ISW releases new maps regularly.) While many news sources have reported that Russia is preferentially targeting non-ISIS fighters, seeing this pattern clearly demarcated on a map sends a much more powerful message.

The subtlety and detail of these maps show a commitment to the kind of accurate understanding that a good map can provide. Rather then applying a “one size fits all” model to mapping ISIS, ISW cartographers tailor each map to convey specific information, and then update those maps on a nearly weekly basis. When mapping terrorist strikes in Europe, they retain a country-based framework while employing a wide variety of graphics to depict the varying threats each nation faces. In their two maps of global ISIS influence, they show both the broad range of countries under threat and the specific areas in conflict, as well as the sheer spread of ISIS influence. Their map of Afghanistan depicts areas of both Taliban and ISIS support and control is great detail, and in so doing provide as clear a picture as possible of the current situation. Lastly, ISW cartographers use a map of Syria to send a clear message about Russia’s present actions in the region and the difference between Russian propaganda and the facts on the ground. Overall, this excellent set of maps will enhance the understanding anyone who takes the time to study them.