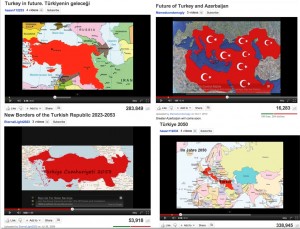 Visions of a Greater Iran, discussed yesterday, come into conflict with other imaginings of geopolitical enlargement, particularly that of “Greater Turkey.” Harsh debates are posted under maps of hoped-for state expansion. The following exchange, accompanying a YouTube clip proselytizing for Greater Iran, typifies the more civil end of the argument spectrum:

Azerigull: Long live Greater Iran, Empire of Iran. To all the turks with illusion that turkey is a nation, you should know that original turks in turkey today are about 5 million that came from China, the remaining population are children of Greece, beloved Iran, and Armania. Long live Empire of Iran, you will Rise again to bring Peace and Harmony to the World.

Agartali Vaiz: Greater Turkey will rise again to form the Small Turan from Bosnia to the Turkish areas of Iran also including Caspian coast; from Aleppo to Turkmenistan, from Crete to Batum, from Tesalonika to Shiraz. After that the project of greater Turan will be the second mission.

YouTube and blogsite dreams of national aggrandizement form an intriguing genre. The discussion forums, when not disabled, make captivating if disturbing reading. Rival camps of extreme nationalists seem to take delight in grossly insulting each other. Although perhaps dismissible as the fantasies of marginal groups, these clips can reach hundreds of thousands of viewers. Viewer numbers vary tremendously, of course, as does video quality. Some productions are minimal: a single map of a “great state” accompanied by patriotic music. Others use fairly sophisticated cartographic animation to show projected change over time. 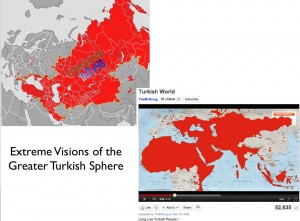 Depictions of “Greater Turkey,” or “Future Turkey,” also vary significantly.  As can be seen in the maps posted above, mega-Turkey is envisaged by some as absorbing such neighboring areas as northern Syria, northern Iraq, northern and eastern Greece, and parts of the Caucasus. A few extremists hope to reclaim all of the lands ever held by the Ottoman Empire—and then some. One map turns northwestward to take in not just the former Yugoslavia, but also Austria, northern Germany, and northeastern France. Some maps of greater “Turkistan” and the “Turkish World” are comically extreme. Most depictions foresee the incorporation of all Kurdish-speaking areas into an enlarged Turkey.

A few proponents of Greater Turkey have gone well beyond drawing imaginary maps. The Turkish ultra-nationalist “Grey Wolves” have long struggled for a more powerful state that could eventually encompass all Turkic-speaking peoples. Turkish authorities have accused the group of carrying out 694 murders between 1974 and 1980. Although declining sharply after being outlawed in 1980, the Grey Wolves were able to prevent the Turkish screening of a film on the Armenian genocide as recently as 2004. Some evidence indicates that the group is resurfacing in western Europe. On October 31, 2011, the International Business Times reported allegations of Grey Wolf attacks against a Kurdish community center in Amsterdam and a Kurdish-owned shop in Saint-Étienne, France. 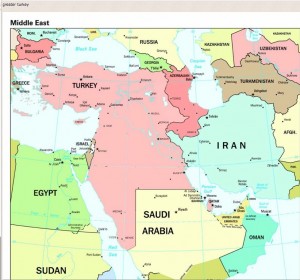 The Turkic-speaking peoples of Iran and Central Asia, especially the Azeris, are caught between the claims of Turkish and Persian “super-nationalism.” Both sides assert rights to the Azeri-speaking region, although one depiction of Greater Turkey does map out a separate expanded Azerbaijan, presumably envisaged as an ally state. Not surprisingly, Greater Azerbaijan is envisaged separately by a group of hard-core Azeri nationalists. In general, however, Iranian Azeris strongly incline towards Iran. Many of the leaders of the Greater Iran movement are themselves Azeri.

The Iranian political allegiance of Turkic-speaking Azeris in northwestern Iran is not surprising. For centuries, the highest levels of the Persian state were dominated by people of Turkish heritage. The rulers of the Safavid Dynasty (1501–1736) were partially if not mostly of Azeri descent, and those of the Qajar Dynasty (1785–1925) stemmed from another group of Turkic people. Azeri Iranians are in general well integrated; virtually all are bilingual in Farsi, and many occupy high social, economic, religious, and political positions. Of course, not all Iranian Azeris embrace Iranian nationalism, and allegations of discrimination do persist. But Iran can to some extent be regarded as a Persian-Azeri partnership, underwritten by the religious bond of Twelver Shi’ism.