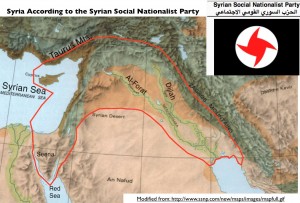 Syria faces challenges to its geopolitical integrity beyond those posed by its religious and linguistic diversity. Like Iraq, it owes its statehood and geographical boundaries largely to the actions of European imperial powers in the early 20th century. Modern Syria essentially covers the area grabbed by France from the Ottoman Empire after World War I. The territory was officially awarded to France as a “mandate” by the League of Nations, with the provision that it would be prepared for eventual independence. French control, however, had already been as promised in a secret British-French war-time agreement—infuriating Britain’s Arab allies, who had cleared Ottoman forces out of most of the region during the conflict. As can be seen in the maps, the British-French partition ignored the Ottoman Empire’s administrative districts. 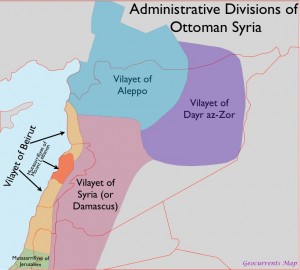 France’s Syrian mandate was larger than the modern country of Syria, including Lebanon as well as the Turkish province of Hatay. French authorities immediately began rearranging the geopolitical blocks of their new land, creating statelets based in part on religion. The Alawite area came to be governed separately, as did the Jabel Druze—Mountain of the Druze—in the south. France was especially keen to establish political space for the largest Christian group, the Maronites. The Ottoman Empire had previously allowed the Maronite region a degree of autonomy as the “Mutasarrifiyet of Mount Lebanon.” French authorities expanded this area, creating a Greater Lebanon that encompassed Shia, Sunni, and Druze districts but retained a Christian majority. 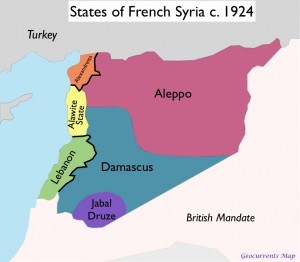 The division of French Syria was not locally popular, nor were French policies. Anger at imperial rule erupted in the Druze-led Great Syrian Revolt of 1925-1927. France prevailed, but agreed afterward to amalgamate Damascus, Aleppo, the Alawite state, and the Druze zone into a single entity. In 1936 Paris promised eventual independence for Syria, which was realized in 1944. In the late 1930s, France also yielded to pressure from Ankara and relinquished Alexandretta (Hatay) in the northwest, which Turkey annexed in 1939. The Syrian government has never accepted this loss, regarding—and mapping—this area as unredeemed territory. Greater Lebanon also remained outside the control of Damascus, gaining its own sovereignty a year earlier than Syria itself. Many Lebanese Muslims objected, and some still demand unification with Syria. Syria, in turn, thinks of Lebanon as a client state, and Syrian troops militarily occupied much of the country during and after the Lebanese Civil War (from 1976 to 2005). 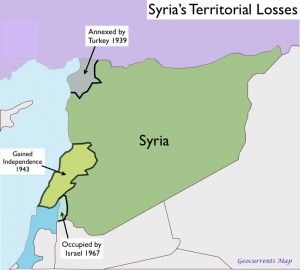 More extreme Syrian nationalist aspirations extend well beyond Lebanon and Hatay. Advocates of a Greater Syria dream of uniting all of the historically Arabic-speaking lands of the eastern Mediterranean. The broadest claims, with the maximal ideological justifications, are advanced by the Syrian Social Nationalist Party (SSNP). The SSNP has designs on a vast territory, encompassing not just the lands of the eastern Mediterranean, but also all of Iraq and significant parts of Iran and Turkey. As is detailed on its website:

“[Syria] has distinct natural boundaries and extends from the Taurus range in the northwest and the Zagros mountains in the northeast to the Suez canal and the Red Sea in the south and includes the Sinai peninsula and the gulf of Aqaba, and from the Syrian sea in the west, including the island of Cyprus, to the arch of the Arabian desert and the Persian gulf in the east.”

Even the eastern Mediterranean itself, the SSNP insists, is rightly called the “Syrian Sea.”

The Syrian Social Nationalist Party, founded in 1932 by the Lebanese-born Christian politician Antun Saadeh, is a secularist and stridently nationalist organization. Long outlawed in Syria, the SSNP was legalized in a symbolic liberalization move in 2005 and now forms the second-largest political party in the country, with an estimated 100,000 members. Long a political player in Lebanon, the SSNP is now affiliated with the anti-Western, pro-Syrian March 8 Alliance. It is usually classified as a far-right organization. A recent article in Canada’s anti-extremist website The Propagandist refers to it as an “unambiguously fascist party.” Political gadfly Christopher Hitchens agrees, arguing that a better name for the organization would be the “Syrian National Socialist party,” reflecting its Nazi proclivities. In 2009, Hitchens was attacked by SSNP toughs in Beirut after he defaced one of the party’s swastika-like banners.

As unsavory as the SSNP may be, it deviates from traditional “national socialism” in several regards. Most importantly, it eschews racialist thinking, and even denies the significance of ethnicity in the formation of the Syrian nation. Instead, it foregrounds geography, arguing that a long history of living together within the same naturally bounded space has melded the various peoples of the region into a single nationality.  As explained by Saadeh, the party’s founder:

“The Syrian nation denotes this society which possesses organic unity. Though of mixed origins, this society has come to constitute a single society living in a distinguished environment known historically as Syria or the Fertile Crescent. The common stocks, Canaanites, Chaldeans, Arameans, Assyrians, Amorites, Hiffites [sic], Metanni and Akkadians etc…whose blending is an indisputable historical fact constitute the ethnic-historical-cultural basis of Syria’s unity whereas the Syrian Fertile Crescent constitutes the geographic-economic-strategic basis of this unity.”

Saadeh’s inclusive attitude toward minority groups had it limits, however. While he opined that “immigrant” groups such as the Circassians and Armenians would fully assimilate into the Syrian nation, he expressly excluded Jews from this category. His statements on this issue reflect virulent anti-Semitism:

“But there is one large settlement which can not in any respect be reconciled to the principle of Syrian nationalism, and that is the Jewish settlement. It is a dangerous settlement which can never be assimilated because it consists of a people that, although it has mixed with many other peoples, has remained a heterogeneous mixture, not a nation, with strange stagnant beliefs and aims of its own, essentially incompatible with Syrian rights and sovereignty ideals. It is the duty of the Syrian Social Nationalists to repulse the immigration of this people with all their might.”

All things considered, the Syrian geopolitical environment reveals—yet again—the inadequacy of the standard model of global politics, where all sovereign countries are assumed to be nation-states. The Syrian state may be relatively strong, but the Syrian nation is a tenuous affair, deeply contested by multiple parties with sharply contrasting visions.