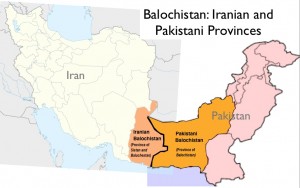 Balochistan, spanning the border between Pakistan and Iran, is a deeply troubled region, beset with rebellion and split by a barrier. Pakistan’s Balochistan province has been in rebellion as often as not since the founding of the country. Wikipedia lists five distinct “Balochistan conflicts” since 1948, but it is not always clear when one conflict ended and another began. The Pakistani military has hit hard in recent years, killing noted Baloch leader Akbar Khan Bugti in 2006 and building new military strongholds. Among the demands of the most recent Baloch uprising is a moratorium on new base construction. As militarization proceeded, a Baloch council formally declared independence from Pakistan in 2009, a symbolic and provocative move. Significantly, the leaders of the self-proclaimed country include Iranian Balochistan within its boundaries, giving it representation on the separatist council. 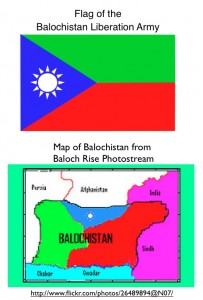 Pakistani Balochistan is a vast province, covering forty-four percent of the country’s territory. It is also one of the poorest regions of an impoverished country, having experienced little development despite its extensive reserves of natural gas and other resources. The arid province is lightly inhabited, its eight million people forming five percent of Pakistan’s total population. Only about forty percent of its people are ethnic Baloch; another twenty percent belong to the culturally, although not linguistically,* similar Brahui group. Northern Balochistan is mostly Pashtun, and the Pashtun presence has been expanding since the Soviet occupation of Afghanistan in the 1980s.  Quetta, the provincial capital, is a largely Pashtun city and a Taliban nerve-center. The influx of non-Baloch people into the province helps propel the insurgency.

Spring 2011 has been politically eventful in Balochistan. In early May 2011, Pakistan’s Chief Justice, Iftikhar Chaudhry, summoned Balochistan’s chief secretary to court; in the subsequent grilling, another judge demanded, “Is there any government in Balochistan?” A few days later, protests erupted over much the province, incited by the discovery of five “decomposed and mutilated bodies” of Baloch activists—not an uncommon occurrence. In April, the Pakistani government tried to defuse tensions by cancelling base construction, pledging that, “no new cantonments will be built unless the people agree to it.” Few Baloch consider the offer genuine. Shortly afterward, the Pakistani government was embarrassed by revelations that the Shamsi airbase in Baluchistan has been under the control of the United Arab Emirates since the 1990s.

Baloch anger focuses on the targeted killings of the ethnic group’s leaders, usually blamed on the Pakistani government. Anti-insurgency opinion counters that Baloch militants have been slaughtering non-Baloch residents of the province, particularly Punjabis—a view that is well represented in the Wikipedia article on the conflict. Local authority figures play down the ethnic angle, but not very convincingly. As Pakistani senator Ikram Khan put it:

Pakhtuns [Pashtuns] and Baloch are brothers and will have to wage a joint struggle against the usurpers. Some elements are hatching conspiracy to create differences between Baloch and Pashtuns but they will not succeed as both nations have had a long history based on trust and sacrifices for each other.

Iran’s Baloch area covers most of the province called “Sistan and Baluchestan.” Although more highly developed than its Pakistani counterpart, it is still “the most underdeveloped, desolate, and poorest of Iran’s provinces.” Grievances here are more religious than economic. The largely Sunni Baloch claim discrimination and persecution by the Shi’ite government and clerical establishment. Attacks by the militant group Jundallah have thus targeted not just the Iranian state and military but also Shia religious observations. The blog IntelliBriefs describes Jundallah as “unrelenting.”

The border-spanning nature of the Baluch rebellion results in knotty geopolitics. Although Pakistan and Iran have cooperated in fighting the insurgency, the Iranian government accuses Islamabad of doing little against Jundallah, and more generally of tolerating if not abetting anti-Shi’ite extremists. Such accusations intensified in late 2010. As reported in IntelliBriefs, one Iranian official claimed that “This counter-revolutionary group [i.e. Jundallah] which is based in Pakistan and is supported from there must be pursued and crushed in Pakistani territory…” Iran, not surprisingly, has also accused the United States, Israel, Britain, and Saudi Arabia of lending support. In early 2010, Iranian television paraded a captured Jundallah militant, Abdolmalek Rigi, who claimed—just before his execution—that he had taken funds from the United States. The same allegation had previously been made by several American critics of US foreign policy, most notably Seymour Hersh. The United States government has denied involvement, and in late 2010 placed Jundallah on its list of foreign terrorist organizations, surprising Iran.

Pakistan accuses India of supporting its Baloch insurgency. Pakistani popular opinion, true to form, also blames Israel and the United States. In public forums, the issue is often debated with extraordinarily harsh invective and profanity. The comments on the YouTube clip of an Al Jazeera report on the Iran-Pakistan border barrier are telling; many fairly drip with hatred, and both pro- and anti-Baloch comments often target the United States. The first comment below is from an opponent of the insurgency, the second from a supporter; both are copied verbatim.

Raw,Mossad,CIA brain washing all you balochis n pashtuns to retaliate against ur own﻿ ppl so that they can start a civil war in the country and divide it wake the fuck up balcohis n pashtuns dnt forget there divide and rulse policy that west always use to rule the world to invade a country.

Baluchis have only recieved death,suffering,stealing﻿ of their resources in last 60 yrs. Even killing of their greatest hero : Nawab Bugti. Pakistan oppresses and kills their own people for USA sake.

The one thing that holds Pakistan together, it often seems, is hatred of the United States. The Baloch and the Punjabis may not have much use for each other, but they can bond over denouncing the US. In the United States, hostility to Pakistan is an increasingly easy sell, embraced by Democrats and Republicans alike. Yet the United States and Pakistan remain military allies. Is such a relationship sustainable?

* Brahui is Dravidian, hence related to the languages of southern India, such as Tamil. That said, it does share a much of its vocabulary with neighboring Indo-European languages