The Uncertain Role of Religion in Indonesia’s 2014 Presidential Election 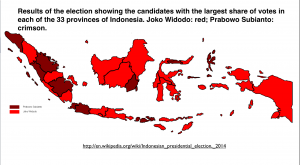 The on-line maps that I have found of Indonesia’s 2014 presidential election are not very helpful. That of the Wikipedia is particularly poor. To begin with, it merely shows which candidate received a majority of votes in each province, with no information provided on the margin of victory. But the returns actually varied quite significantly across the country, with the winning candidate Joko Widodo receiving more than 73 percent of the votes cast in Papua and fewer than 24 percent of those cast in West Sumatra. The color scheme used in the Wikipedia map is also poorly conceived. 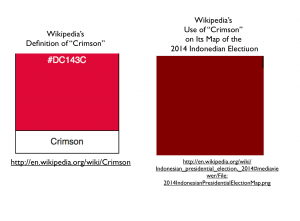 Provincial victories for both candidates are marked in shades of red, although, as the caption notes, a more standard red is used for Joko Widodo, whereas “crimson” is used for Prabowo Subianto. But according to the Wikipedia’s own article on “crimson,” the shade used on the map is actually something different. To be sure, the Wikipedia does differentiate a number of shades of crimson, many of which are associated with college sports teams, but none approximates the color used on the map. 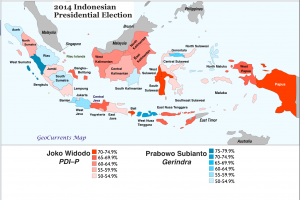 Due to such quibbles, I have made my own map of Indonesia’s 2014 presidential election, posted here. The map shows relatively weak regional patterning overall, with both candidates taking provinces in most parts of the country. But it also shows reasonable strong voting differentiation by province, as noted above. I have tried, although perhaps not hard enough*, to find explanations for such electoral behavior, albeit without much luck. The patterns on the election map certainly do not 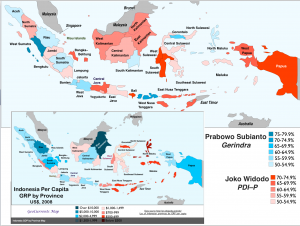 correlate well with those found on the map of GDP per capita, as can be seen in the paired maps (compare, for example, the showings of East Kalimantan and East Nusa Tenggara on the two maps.) 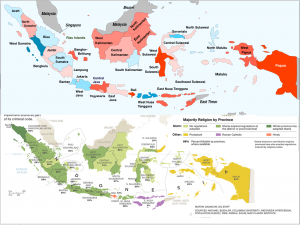 A better, although far from perfect, correlation is found in regard to religion. As can be seen in the second set of juxtaposed maps, Muslim-minority provinces all supported Joko Widodo (Jokowi), several of them quite strongly. But then again, a number of strongly Muslim provinces also cast a high proportion of their votes for Jokowi. It is also noteworthy that Aceh in far northern Sumatra, which is the most resolutely Islamic part of Indonesia, supported the losing candidate Prabowo Subianto by a relatively thin margin.

Unfortunately, the map of religion does not indicate either degrees of religiosity or the prevalence of orthodox interpretations, both of which may also play a role. This issue is particularly significant in regard to Java, the demographic core of the country (of Indonesia’s 252 million inhabitants, 143 million live on Java). Central and Western Java have long been noted for their heterodox interpretations of the faith; until recently, a majority of people here have adhered to a form of worship sometimes called Kebatinan, which is defined by the Wikipedia as a “Javanese religious tradition, consisting of an amalgam of animistic, Buddhist, and Islamic, especially Sufi, beliefs and practices … [that is] rooted in the Javanese history and religiosity, syncretizing aspects of different

religions.” Although mainstream Islam is spreading in eastern and central Java—the Javanese-speaking portions of the island—this area still remains much less conventionally devout than the Sundanese-speaking area of western Java. In the 2014 election, perhaps not coincidentally, western Java supported Prabowo, whereas the east and especially the center opted instead for Jokowi.

The best report what I have found on the role of religion in the 2014 Indonesian presidential election is found in an Al Jazeera article entitled “Religion the Dark Horse in Indonesia Election.” Published before the election was held, it argued that:

[P]rior to Jokowi’s emergence as a political figure in 2012, when he was elected governor of Jakarta, members of religious minorities tended to support a Prabowo presidency – viewing him as a forceful figure able to crack down on impunity, and noting that his brother and mother are both Christian. Now, he says, Jokowi is the favourite among religious minorities.

“In general, Prabowo has been pandering to Islamist sentiment and Jokowi has been more pluralist in his outlook,” said Gregory Fealy, an Indonesia expert at Australian National University. Accordingly, three of the four Islamist parties that won seats in parliament have joined Prabowo’s coalition; the fourth, the moderate PKB, supports Jokowi.

Prabowo has also been endorsed by the Islamic Defenders Front (FPI), a hardline group whose members have been involved in attacks against religious minorities, bars and nightclubs. 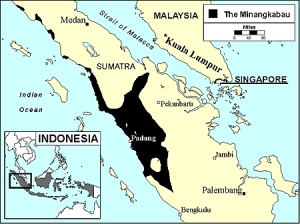 This explanation, however, leaves me with two perplexities. First, why would hyper-devout Aceh have given Prabowo such lukewarm support? Could it be that many Acehnese people are chafing under the region’s harsh imposition of Sharia law? More surprising still is the extremely high level of support for Prabowo in West Sumatra. West Sumatra is certainly a Muslim-dominated province, but, like central and eastern Java, it has long been characterized by a rather lax form of their faith, one that historically prioritized customary law (adat) over Sharia. Indeed, the dominant ethno-linguistic group in the province, the Minangkabau, are noted for their matrilineal system of reckoning decent and familial property, a system so engrained that the Minangkabau have been characterized (incorrectly, in my view**) as forming a “modern matriarchy.” As a result, the extremely strong showing of Prabowo in the province seems odd. If any readers have any insights into this issue, I would love to hear them.

*It is currently exam- and paper-grading season, which is taking up most of my time.

** The Wikipedia describes Minangkabau culture as “matrilineal and patriarchal, with property and land passing down from mother to daughter, while religious and political affairs are the responsibility of men.” I do not, however, think that either “matriarchy” or “patriarchy” are appropriate terms in this context.