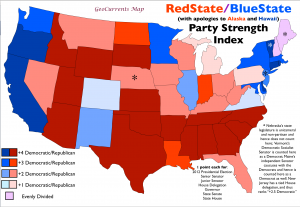 The information used to make this map is found in a table in a Wikipedia article on “Political Party Strength in U.S. States.” This table includes another category, labeled “demographic,” that is based largely on party affiliation. I have ignored this information because it does not necessarily represent current conditions. In West Virginia, for example, the Democratic Party has a substantial advantage over the Republican Party in terms of voter registration, and a generation ago West Virginia was among the most reliable states for the Democratic Party. But despite formal party affiliation, West Virginians now favor Republican candidates, a tendency that has been strengthening over the past several election cycles.

The map indicates that the Democratic Party was two regional strongholds: the Pacific Coast and zone centered on southwestern New England, New York, and the coastal mid-Atlantic belt. The Great Lakes region, often regarded as part of “blue America,” appear here as a mixed zone with a slight Republican edge.