The Rightwing Nationalist Vote in the Turkish 2015 Election 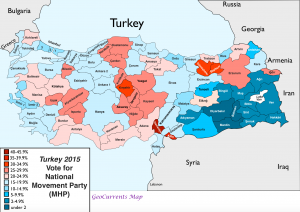 As noted in previous posts, the right-wing Nationalist Movement Party (MHP) of Turkey did relatively well in the 2015 election, ending up in third place with 16 percent of the vote. It gained 80 parliamentary seats (the same number as the leftwing Peoples’ Democratic Party (HDP), an increase of 28 seats from the previous election. Describing the political stance of the MHP is not easy. Previously a far right party, it has moved somewhat to the center in recent years. Some observers, however, are skeptical of this change. As noted in the Wikipedia:

The MHP used to be described as a neo-fascist party linked to extremist and violent militias. Since the 1990s it has, under the leadership of Devlet Bahçeli, gradually moderated its programme, turning from ethnic to cultural nationalism and conservatism and stressing the unitary nature of the Turkish state. Notably, it has moved from strict, Kemalist-style secularism to a more pro-Islamic stance, and has – at least in public statements – accepted the rules of parliamentary democracy. Some scholars doubt the sincerity and credibility of this turn and suspect the party of still pursuing a fascist agenda behind a more moderate and pro-democratic façade. Nevertheless, MHP’s mainstream overture has strongly increased its appeal to voters and it has grown to the country’s third-strongest party, continuously represented in the National Assembly since 2007 with voter shares well above the 10% threshold.

Despite taking only 16 percent of the vote, the MHP gained a relatively strong position owing to the divided nature of the election and hence of the Turkish parliament. Steven A. Cook recently described Devlet Bahçeli, the leader of the MHP, as the “the strongest man in Turkish politics today,” based on the idea that Erdogan’s AKP would have to reach out to him to form a coalition government. That will not be easy, however. According to a recent article in Today’s Zaman:

The preconditions set by Devlet Bahçeli, the leader of the Nationalist Movement Party (MHP), to form a coalition with the AK Party included the reopening of the corruption claims against four former ministers and President Recep Tayyip Erdoğan’s son Bilal Erdoğan, moving the presidential palace back to its original place in Çankaya and dropping the “settlement process,” also known as the “Kurdish opening.”

As a highly nationalistic party, the MHP is deeply opposed to any accommodation with Turkey’s Kurds. Erdogan’s government has made some openings here, upsetting the MHP, yet it is increasingly hostile to Kurdish interests in northern Syria, and has even threatened to invade if the Syrian Kurds try to form their own state.

The geographical contours of the MHP vote are not particularly clear-cut, as can be seen in the map posted here. The party did quite well in many provinces in central and northeastern Anatolia, and it took more than 10 percent of the vote across most of the country. It received fewer votes in the metropolitan areas of Istanbul and Izmir, but only in the Kurdish southeast was its support negligible. Its particularly strong showing in south-central Osmaniye is easily explained, as this is the home of the party’s leader, Devlet Bahçeli.

In general, provinces that supported the left-wing, pro-Kurdish HDP gave extremely few votes to the right-wing, Turkish nationalist MHP, and vice versa. There is, however, one major exceptions to this rule, Iğdır Province located in the far east. Iğdır gave 27 percent of its vote to the MHP and 56 to the HDP. Considering the fact that Iğdır is split relatively evenly between Azeris and Kurds, with few ethnic Turks, I find these returns quite surprising. Evidently, large numbers of the provinces Shia Azeris voted for the hard-core Turkish-nationalist MHP. 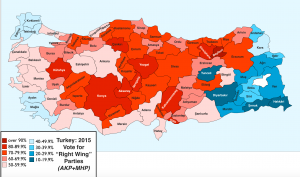 Overall, the Turkish electorate remains quite conservative, as can be seen in the final map in this series, one that shows the combined vote of the country’s two rightwing parties, the moderately Islamist AKP and the strongly nationalistic MHP. Over most of central Turkey, the conservative parties retain overwhelming levels of support.