Regional and Ethnic Patterns in the 2013 Iranian Presidential Election 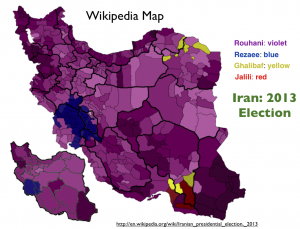 The recent Iranian presidential election revealed some interesting geographical patterns. The election itself seems to have been reasonably free, although it was undermined by the previous disqualification of reformist candidates. Hassan Rouhani, widely viewed as the most moderate and pragmatic of the six candidates, won election handily. As can be seen in the Wikipedia map posted here, Rouhani took a majority or plurality of votes in all but three provinces, all located in the southwest. Elsewhere in the country, he triumphed in all but a handful of districts; the few that he lost are clustered in the northeast and southeast. Rouhani did particularly well in the northern and northwestern peripheries, winning substantial majorities in Kurdish-, Azeri-, and other non-Farsi-speaking parts of these regions. He also triumphed handily in the Baluchi-speaking far southeast. 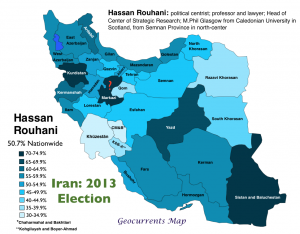 (One central Iranian province, Markazi, presents an enigma in regard to these results. The Wikipedia map shows Rouhani as having won the province by a relatively narrow margin, yet the provincial data in the same article show a much wider spread. The same situation obtains in the Electoral Politics 2.0 website; here the map gives Rouhani a fairly narrow win in Markazi, but the accompanying table indicates that he took more than 70 percent of the province’s vote. The GeoCurrents maps posted here are based on the data table found in Electoral Politics 2.0, and therefore show a commanding Rouhani win in Markazi—but with a question mark.) 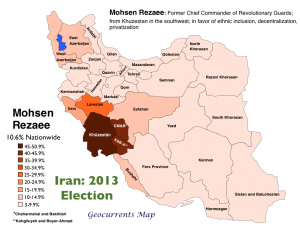 The only candidate besides Rouhani to win any provinces was Mohsen Rezaee, who won a plurality of votes in Khuzestan, Chaharmahal & Bakhtiar, and Kohgiluyeh & Boyer-Ahmad provinces, all located in the southwest. Rezaee also did relatively well in the Azeri-speaking northwest, but elsewhere his votes were few, and as a result he finished in fourth place. A former chief commander of the Revolutionary Guards from Khuzestan Province in the southwest, Rezaee stressed ethnic inclusion, decentralization, and privatization. This message evidently sold better in his native region than in other parts of the country.

The ethnic pattern shown by the Rezaee vote is more complicated than it might seem at first glance. Khuzestan is an oil-rich but restive province whose densely settled rural southwest is dominated by Arabic-speakers. Rezaee, however, did not do particularly well in the Arab core, as can be seen on the detailed Wikipedia map. His base of support was rather in the Luri-speaking uplands of eastern Khuzestan, Chaharmahal & Bakhtiar, and Kohgiluyeh & Boyer-Ahmad. But Rezaee did not do equally well in all Luri-speaking areas; in Lorestan Province itself, he received only 28 percent of the vote against Rouhani’s 48 percent. Such a discrepancy, however, is not particularly surprising, as Luri speakers do not form a tightly integrated ethnic group. The Luri language forms a continuum, closely related to Persian, and one of its dialects, Bakhtiari, is often regarded as separate language.

The Bakhtiari people form the core group of Rezaee supporters. (Although I have not found specific information on Rezaee’s ethnic affiliation, IranTracker notes that he was born in a “Bakhtiari tribal area.”) A traditionally nomadic tribal confederation now some three to five million strong, the Bakhtiari once played a major role in Iranian politics. The Constitutional Revolution of 1905–1907 that led to the downfall of the Qajar Dynasty gained its strength from Bakhtiari tribal levies. Later Iranian leaders feared Bakhtiari power and tried to curtail it.  As the Wikipedia explains:

Reza Shah Pahlavi (r. 1925-1941) would be amongst the first modern Shahs who made destruction of the Bakhtiari influence, his mission. The existence of oil on Bakhtiari territory further motivated the Pahlavi monarch to undermine the autonomy of the tribe and force its population to adhere to the commands of the central government. Reza Shah Pahlavi would eventually execute few noteworthy tribal leaders as to crush Bakhtiari autonomy and maintain control over the tribe.

Despite such efforts at crushing, the Rezaee vote would indicate that the Bakhtiari people maintain a strong sense of political cohesion. 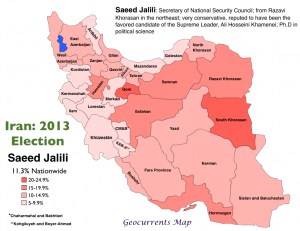 The geographical patterns evident in the vote for the third-place candidate, Saeed Jalili, are not nearly so pronounced. Jalili, Secretary of the National Security Council, was widely regarded as the most conservative candidate, reputed to have been favored by the Supreme Leader, Ali Hosseini Khamenei. As such, his 11.3 percent take was no doubt a disappointment to the regime. Jalili gained his largest percentage of the vote in his native Khorasan region (although he did better in South Khorasan than in his own homeland of Razavi Khorasan) and in Qom, Iran’s religious center. He did particularly poorly in non-Farsi-speaking areas of western and northern Iran. 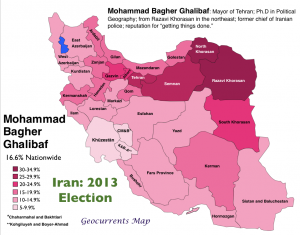 The second-place candidate, with 16.6 percent of the vote, was Mohammad Bagher Ghalibaf, the mayor of Tehran. Also from Razavi Khorasan, Ghalibaf has a Ph.D in political geography and was the former chief of Iranian police. He has a reputation for “getting things done.” Ghalibaf ran well in Tehran and neighboring provinces, and did especially well in his native Khorasan. Although not apparent on the province-level map, Ghalibafran also gained large numbers of votes in certain parts of the southeast (although not in Sistan & Baluchestan), coming in first place in several districts in eastern Hormozgan and southern Kerman. As can be seen on the Wikipedia map, Jalili did very well in this same general area. I have not been able to find anything that would indicate why this area would have such aberrant voting patterns, and I would welcome any information or speculation from readers. 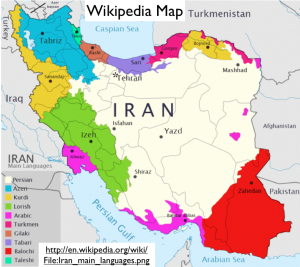 A forthcoming post will examine Iranian voting patterns in previous elections. Another post will take on Iran’s linguistic geography, as different maps show very different patterns. I suspect that many maps, and especially the Wikipedia map posted here, unreasonably reduce the area of Persian/Farsi speech.