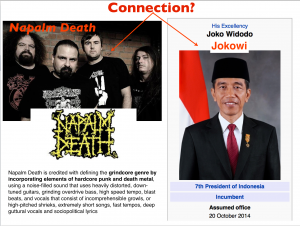 When lecturing in my course on the History and Geography of Current Global Events, I always begin by showing an enigmatic map or other image and asking if anyone can make sense of it. This week the topic was Indonesia, focusing on the country’s 2014 presidential election (which is admittedly rather old news). I began the class with the image posted to the left, as I wanted to see if anyone could draw a connection between the heavy-metal band Napalm Death and His Excellency Joko 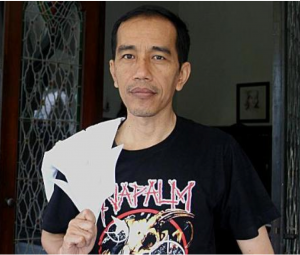 Widodo, the seventh president of Indonesia. No one supplied the answer, which is provided in the next image: Jokowi (as he in called in Indonesia) is a huge fan. He also follows other 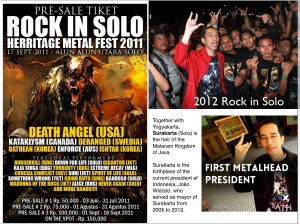 metal bands, and he has helped promote metal concerts in his native city, Surakarta (also known as Solo).

Heavy metal music comes in a variety of sub-genres, as I learned in preparing the lecture. That of Napalm Death (“grindcore”) is particularly harsh, at least to my untutored ear, and I must admit to feeling rather astonished that its appeal would extend much beyond angst-ridden teenagers, and especially that it would reach a powerful middle-aged politician such as Joko Widodo. But Jokowi is no ordinary political figure, as he is very much a “man of the people.” More important, metal bands have played a significant role in recent Indonesian history. As Madeleine King explains in a blog post entitled “Live for Satan,” “It may surprise some to learn that heavy metal—a sub-genre of rock music that emerged largely from America and England in the 1970s—was at the heart of Indonesia’s late 1990s pro-democracy movement.” Jokowi was, of course, a much younger man at that time, and it is thus perhaps not so surprising that he would still favor a musical genre associated with the downfall of Indonesia’s authoritarian government.

With all of that in mind, I tried to listen to Napalm Death with a more open mind, but hearing their songs still seemed more like an assault on my ears than a genuine musical experience. (Here I am perhaps merely showing my age, but my 15-year-old daughter agreed.) The growled and grunted vocals were especially off-putting. But the actual lyrics (see the end of the post for one example) are not unintelligent, and here I can begin to see the attraction. 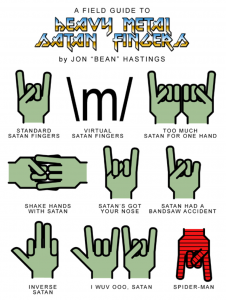 But the fact that a major fan of Napalm Death could win a presidential election, and do so in predominantly Muslim country, still strikes me as remarkable. I doubt very much that such a candidate could triumph in the United States, as accusations of “Satanism” would fly thick and would likely stick. And indeed, satanic imagery is common across much of the metal world. Some would even say that the hand gesture made by Jokowi in the image posted above indicates the horns of Satan, although here I remain skeptical – and I find the satirical poster of “satanic hand signs” posted here to be quite amusing.

Certainly many Muslim critics, both in Indonesia and elsewhere, have accused metal music of encouraging Satanism. As the abstract to Mark Levine’s “Doing the Devil’s Work: Heavy Metal and the Threat to Public Order in the Muslim World” puts it, his article shows “the largely negative reaction to the music by Muslim governments and societies, and how, in a certain sense, today’s Muslim metalheads are fulfilling a historic function of Satan in Islamic theology.” But as Levine also shows in his book Heavy Metal Islam: Rock, Resistance, and the Struggle for the Soul of Islam, the genre is highly popular among certain youth segments in many Muslim countries, and it often incorporates pro-Islamic overtones. As the author of a recent blog-post frames it, “Today, metal and Islam play a more synergistic role.” The same post also notes that the Israeli metal band Orphaned Land is one of the few institutions in the region able to bridge the gap between Jews and Muslims.

In Indonesia, it would seem that hardline Sunni Muslim stalwarts are currently more interested in countering Shia and Ahmadiyya Islam than they are in taking on heavy metal music, although I would have to do more research here to make any conclusive statements. 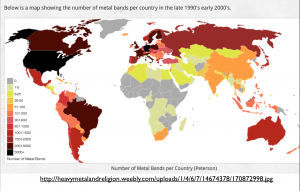 Although heavy metal music may be widespread in the Muslim realm, it is even more popular elsewhere. As the map posted to the left indicates, metal bands are far more numerous in Europe and the Americas. In regard to Muslim-majority countries, Indonesia does occupy a prominent position, although it is surpassed by neighboring Malaysia. According to this somewhat dated map, sub-Saharan Africa is the only major region of the world to have been largely bypassed by the metal phenomenon. It would be interesting to see an updated version, as I would be especially curious to find out if the genre has reached Afghanistan. 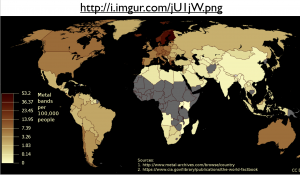 In per capita terms, a different map emerges. Here we can see that the Nordic countries form the core region of metal music, with Finland occupying the top spot. A 2013 BuzzFeed post attempts to explain this intriguing fact through climatic determinism—“The dark winter surely plays a major role in this attachment to suicidal lyrics, double bass drum, and the color black”—but such an explanation does not work for sunnier metal-loving countries, such as Greece. The same BuzzFeed post notes that Finland leads the world in a number of additional categories, most of which seem quite distant from the realm of heavy metal, including education, lack of corruption, and the borrowing of books from libraries. Finland is also the world’s top coffee-consuming country. Perhaps if I had enough caffeine in my system I would be able to appreciate the music of Napalm Death.

You made me what I am,

Am I the mental feast,

A pawn within a losers game,

My strength will grow upon your fear.

Judge me not before yourself.

Take my pride – that’s all you can.

For what atonement do you seek,

Your dying grasp of loyalty breaks like brittle bones.

For I am more powerful than you’d imagine.