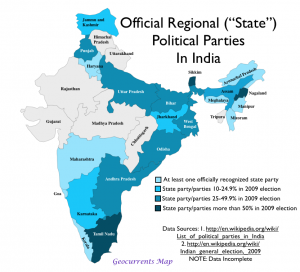 As India and Indonesia, the world’s largest and third largest democracies respectively, carry out their complex 2014 national elections, it is worthwhile to compare their political and electoral developments since independence. Although the two countries have much in common, they have taken a markedly different direction in political ideology and electoral geography. In India today, two major and several minor national parties, all ideologically distinct, vie with an array of state-based regional parties*, generating complex trans-party alliances. In Indonesia, regional parties are of no significance, and all of the major parties follow the Indonesian national credo of Pancasilaas their guiding ideologies. To be sure, ideological differences are found among Indonesian political parties, but these tend to be much more muted than what is encountered in India. 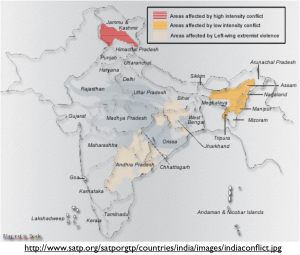 The similarities between the two countries are numerous. India and Indonesia both cover core areas of relatively coherent cultural-historical regions, although both of these larger regions have been geopolitically sundered: “greater India” by the post-colonial partition that created Pakistan (and eventually Bangladesh), and “greater Indonesia” by the colonial division between the Netherlands and Britain that led to the separation of Indonesia and Malaysia (as well as Singapore and Brunei). At the same time, both countries include areas that were never part of these expansive cultural-historical regions, but were instead appended to them by colonial forces. In India, the far northeast (Nagaland, Mizoram, etc.) fits best into this category, while in Indonesia the most relevant area is the western half of the island of New Guinea. Both of these peripheral areas, not surprisingly, are the sites of perennial but low-level insurgencies.

Although India is a predominately Hindu country (80 percent) while Indonesia is mostly Muslim (87 percent), religious similarities are significant as well. Historically speaking, both countries have a dual legacy of Hinduism and Islam, and while in Indonesia the former faith was long ago largely relegated to the island of Bali, the great Hindu epics, the Ramayana and Mahabharata, continue to play a crucial role over much of Java. The Muslim communities in both countries, moreover, are divided between those who adhere more to mystical Sufi orientations and those who favor more strict scriptural interpretations. Both India and Indonesia also include distinct areas of Christian and animist majority, although in Indonesia animism is officially prohibited, as one the five principles of Pancasila—the official state creed—demands “belief in the divinity of God.” Atheistic Marxism has also played a major role in both countries, although Indonesian communism was violently crushed in 1965, whereas in India it still underwrites a major peaceful political party (CPI[M]) as well as a violent but localized “Maoist” insurgency.

India and Indonesia also have some linguistic commonalities. Both countries are noted for their diversity of languages, and neither has a majority mother tongue. Yet in both countries, one regional language stands well ahead of all others in terms of native speakers: Hindi in India and Javanese in Indonesia. Both of these languages, moreover, are centered in their country’s demographic core area, which are noted for their rural crowding and poverty (the central Ganges Basin in regard to Hindi; central and eastern Java in regard to Javanese). Not surprisingly, both states have experienced tensions between their regional language groups and their core language populations.

In economic terms, severe regional discrepancies are found in both countries. India and Indonesia alike contain rapidly growing and relatively prosperous areas, and large swaths of land that have experienced much less social and economic development.

Owing in part to such religious, linguistic, and economic diversity, both India and Indonesia have seen efforts by important regions to secede and form independent states. India, for example, long struggled against the Sikh-inspired movement to create a sovereign state in the Punjab (“Khalistan”), whereas in Indonesia the religiously devout Muslim region of Aceh has most insistently wanted out. While India defeated the Khalistan independence movement outright, Indonesia has evidently solved its Aceh problem by granting the region pronounced legal and political autonomy. Indonesia totally lost, moreover, the region of East Timor (Timor Leste), which gained independence in 2002  (although it must be noted that East Timor was not part of the original Indonesia “geobody,” having been annexed only when Portugal retreated from the area in 1975). Another historical parallel involves territorial rivalry with a closely related neighboring state. A low-level war in the mid-1960s between Indonesia and Malaysia, known as the “Confrontation” (Konfrontasi), focused on the Island of Borneo, whereas the struggle between India and Pakistan over Kashmir has persisted from partition in 1947 to the present.

Overall, both India and Indonesia have faced similar issues of regional devolution and separatism, yet both have succeeded in building relatively strong national identities, with active separatist movements now being largely confined to remote and peripheral locales. Given such similarities, why then does India contain such strong regionally based political parties, whereas in Indonesia such parties are lacking? And why, we might also ask, are Indonesia’s political parties so ideologically indistinct, at least on the surface, unlike those of India?

Such questions defy easy answers, and I would not pretend to supply them here. It does seem pertinent, however, that India has a much more stable democratic legacy than Indonesia, having been under elected governance since independence, with the brief exception of “The Emergency” under Indira Gandhi (1975 to 1977). Indonesia, on the other hand, has experienced lengthy periods of autocratic rule as well as a prolonged spell of “guided democracy” (1957-1966). In comparative terms, India’s democratic stability could help generate political regional and ideological diversity, just as the instability of Indonesia could militate against it. Indonesia’s arguably weaker territorial integrity could also be a factor. The restive Indonesian region of western New Guinea, for example, is much larger and more resource-rich than India’s insurgency-plagued far northeast. If Indonesian political leaders are worried about losing the provinces Papua and West Papua, and perhaps other peripheral areas as well, they would have a pronounced incentive to band together and emphasize national unity. 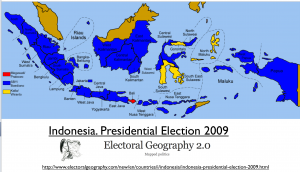 But if Indonesia might be regarded as less democratically and territorially secure than India, it is arguably more culturally unified, at least in terms of language. While India has not seen the emergence of a nationally unifying native language, Indonesia has. Although only about 25 million out of 237 million Indonesian speak Bahasa Indonesia as their first language, the vast majority speaks it as a second language. The success of Bahasa Indonesia in education, media, and politics, moreover, is undeniable. Language-based politics therefore has little significance in Indonesia, unlike the situation in India. In India, demands for the creation of new states have often (but not always) been based on issues of language and ethnicity. Such controversies, in turn, have helped generate strong regionally based political parties.

Note: the data used to compile the map of state-based parties in India is incomplete, which has probably resulted in several errors.

* The Wikipedia provides a good description of regional (“state”) political parties in India:

If a party is recognized as a state party by the Election Commission, it can reserve a symbol for its exclusive use in the state. The following are a list of recognised state parties as of 12 January 2014:

1. At General Elections or Legislative Assembly elections, the party has won 3% of seats in the legislative assembly of the State ( subject to a minimum of 3 seats).

2. At a Lok Sabha General Elections, the party has won 1 Lok sabha seat for every 25 Lok Sabha seat allotted for the State.

At a General Election to Lok Sabha or Legislative Assembly, the party has polled 8% of votes in a State.