The Geography of Iowa’s Republican Shift 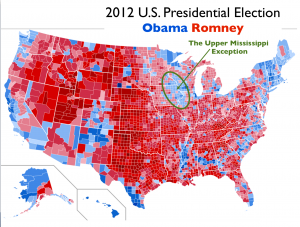 As mentioned in the previous post, one of the few parts of the United States in which White-majority rural (or small-city-focused) counties regularly vote for Democrats in national elections is the “greater Upper Mississippi Valley,” as outlined on the map posted here. Across the country more generally, non-metropolitan White-majority “blue” countries are found on the Pacific Cost and in the Northeast; elsewhere they can usually be linked to specific occupational or demographic characteristics, such as the presence of major universities (Athens County, Ohio), a historical legacy of unionized mining (Silver Bow County, Montana), or the presence of major outdoor amenities, such as ski resorts (Blaine County, Idaho). But only in a few parts of the Upper Midwest can one find Democratic-voting, White-majority, non-metropolitan countries that do not have these specific characteristics. A major question now is whether the Upper Mississippi Valley will retain its distinctive voting pattern. If the 2014 U.S. senate election in Iowa is any indication, the answer may well be “no.”

Iowa is regarded as a particularly important state in U.S. politics for two reasons. First, it holds the earliest party caucuses, and thus plays an outsized role in selecting the presidential candidates of both parties. Second, it has been something of a “swing state” in recent elections, with relatively close contests between Republican and Democratic candidates. In general, western Iowa tends to the Republican side while eastern Iowa usually support Democrats, a pattern clearly evident on the 2012 presidential election map. 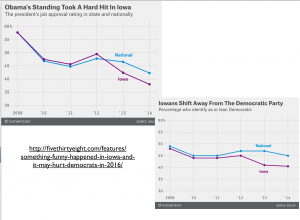 In 2014, however, the Republican candidate for the U.S. Senate in Iowa, Joni Ernst, shocked political pollsters with her commanding victory over her Democratic opponent, Bruce Braley. As Harry Enten, writing in FiveThirtyEightPolitics, notes:

Republican Sen.-elect Joni Ernst easily won her race in Iowa last Tuesday, beating Democrat Bruce Braley by 8.5 percentage points. Her victory wasn’t shocking, but its size was (to everyone except pollster Ann Selzer, that is). The final FiveThirtyEight projection had Ernst winning by just 1.5 percentage points.

What the heck happened?

Enten attributes this unexpected margin of victory to the fact that Barack Obama’s popularity has dropped more sharply in Iowa than in the rest of the country, which in turn has made Iowa a more Republican-leaning state. His careful statistical analysis shows that one group in particular has been abandoning the Democrats in Iowa. As he explains:

Here’s one explanation: White voters in Iowa without a college degree have shifted away from the Democratic Party. And if that shift persists, it could have a big effect on the presidential race in 2016, altering the White House math by eliminating the Democratic edge in the electoral college. 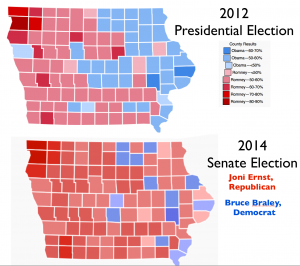 The movement of non-college-educated White voters away from the Democrats is a national phenomenon, but it has been more pronounced in Iowa than elsewhere.

Although Enten does not mention it, gaffes by the Democratic senatorial candidate Braley probably played a significant role. Braley’s comments at an out-of-state fundraising event attended mostly by lawyers attracted considerable attention in the state:

As conservative blogger Erick Erickson noted, such comments were “colossally stupid,” especially when one considers how important agriculture is to the state of Iowa. Insulting the state’s farmers is not a good ploy. 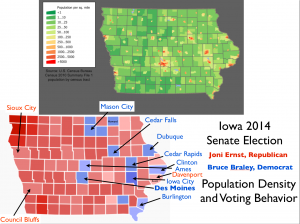 As it turns out, only a handful of truly rural counties in Iowa supported Bruce Braley in the 2014 election. As the map that I have annotated indicates, most of the counties that he won are dominated by small or mid-sized cities. To be sure, counties with such demographic characteristics elsewhere in the Midwest generally vote Republican, showing that there is still something of an “Upper Mississippi Valley Exception.” But when it comes to the more purely agricultural counties, Braley had little success. It would be interesting to examine the remaining exceptions, such as “still-blue” Howard County in the northeast, which saw its population peak at 13,705 in 1920 and which is 99.06 percent White. (Howard County happens to be the birthplace and childhood-home of Nobel Laureate Norman Borlaug, often deemed the founder of the Green Revolution.) Note as well that the more urban counties of western Iowa remain in the Republican camp. More surprising was the Republican win in Scott County (centered on Davenport), as it is the Iowa’s third-most populous county and is located in the extreme east along the Mississippi River. 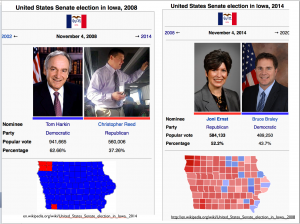 It is instructive to contrast the 2014 Iowa senatorial election with that of 2008. In the earlier election, Tom Harkin, one of the more left-leaning members of the U.S. senate, won an overwhelming victory, taking all but five counties. Harkin was helped by the fact that 2008 was a highly favorable year for Democrats and was further boosted by the gaffes of his opponent. As noted in the Wikipedia:

On October 23, [Republican candidate Christopher] Reed and Senator Harkin met for a debate on Iowa Public Television. During the debate, Reed made personal attacks on Harkin, accusing him of being the “Tokyo Rose of Al-Qaeda and Middle East terrorism” and calling him “anti-American” and alleging that he provided “aid and comfort to the enemy” in a speech calling for the closure of the United States military prison at Guantanamo Bay, Cuba. After the debate, both Harkin and moderator David Yepsen chastised Reed for the attacks. Yepsen said that he had “never heard a candidate make that kind of serious charge about his opponent.”

In the 2014 Campaign, Republican candidate Joni Ernst made several comments that the Democrats hoped would cost her votes. These included, as noted in the Washington Post, her claims that “we have created ‘a generation of people that rely on the government to provide absolutely everything for them,’ and that wrenching them away from their dependence ‘is going to be very painful.’” Evidently such statements had little effect. On the other hand, Ernst might have gained votes by her most widely quoted comment: “I grew up castrating hogs on an Iowa farm, so when I get to Washington, I’ll know how to cut pork.”