Geographical Patterns in the German Federal Election of 2013 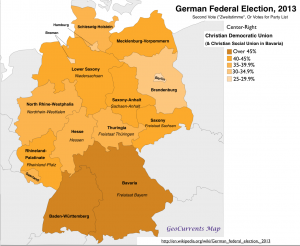 The recent German federal election has been widely heralded as a major victory for Chancellor Angela Merkel and her Christian Democratic Union party (along with its regional sister party, the Christian Social Union in Bavaria). Taking almost 42 percent of the vote and nearly half of the seats in the Bundestag, Merkel’s center-right party had its best showing in almost a quarter century. It is thus not surprising that the Chancellor “urged her party to celebrate ‘a super result’ as she looked set for a historic third term” (as reported by the BBC).

Merkel’s victory, however, was far from overwhelming. The three main parties of the left, the Social Democratic Party (SPD), Alliance ’90/The Greens, and The Left (Die Linke), would, if combined, control enough seats to form a government, a possibility precluded only because the former two parties refuse to join forces with the hard-left Die Linke. Moreover, Germany’s other main center-right party, the Free Democrats, did not reach the five percent threshold necessary for representation in the Bundestag, a massive decline from its 14.6 percent showing in 2009. 2013 marks the first time since it was founded in 1948 that the “classically liberal” Free Democrats failed to gain representation. The party’s 2,082,305 votes (4.8 percent) were almost matched by those of the upstart, anti-Euro Alternative for Germany (2,052,372), founded earlier this year. The only other parties to win more than one percent of the vote were the Pirate Party (2.2%), which stresses Internet freedom, and the far-right National Democratic Party (1.3%). Germany’s only significant secessionist organization, the Bavaria Party, took only 57,285 votes, a slight gain from its 2009 showing of 48,311. Other minor parties participating in the election include the deep-green Human Environment Animal Welfare Party (140,251 votes), the “eco-pro-life” (for want of a better term) Ecological Democratic Party (127,085 votes), the “radical-centrist” Die PARTEI, which supposedly wants to rebuild the Iron Curtain and turn the former East Germany into a Special Economic Zone (78,357 votes), The Republicans, an anti-immigration group (91,660 votes), and the evangelical Party of Bible-Abiding Christians (18,529 votes). 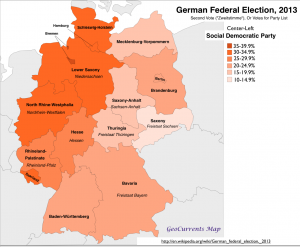 Electoral maps at the level of the sixteen constituent states (Länder) of Germany reveal distinct geographical patterns. (Note: these maps, like the figures given above, show the results of the “second”* vote, in which voters select a party, determining whether it passes the five percent threshold, rather than a specific Bundestag candidate.) As in other recent elections, that of 2013 shows Germany to be roughly divided into three political regions: the northeast, the northwest, and the south. The northeast—the former East Germany—is much more supportive of candidates from the far left than is the rest of the country, as can clearly be seen on the map showing support for Die Linke (“The Left”). In the former West Germany, Die Linke did fairly well in industrial Saarland and in the urban state of Bremen, but even here its count was less than half of what it received in the northeast. Due in part to the local strength of the far left, the center-left Social Democrats performed poorly in the former East Germany, taking less than fifteen percent of the votes in Saxony. (Overall, the Social Democrats had their second-worst showing since 1949.) Also notable is the fact that the Green Party as well failed to gather many votes in the former East Germany, outside of east-central Berlin. As can also be seen, the Green Party did particularly well in urban areas, gaining over twelve percent of the vote in Berlin, Bremen, and Hamburg. 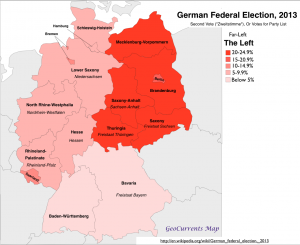 In the former West Germany, the south is clearly more conservative than the north. As is the case in most elections, Bavaria in particular supported the center-right, giving just under half (49.3%) of its votes to the Christian Social Union in Bavaria and less than a quarter to the Social Democrats and Die Linke combined. Baden-Württemberg in the southwest also solidly supported the center-right, although not to the same extent as neighboring Bavaria. Baden-Württemberg, noted for its engineering-oriented economy, also gave a relatively high percentage of its votes to both the Greens and the Free Democrats. 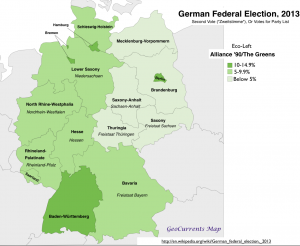 Unsurprisingly, Germany’s electoral map shows relatively close correlations with its map of per capita GDP, especially if one excludes the urban states of Hamburg, Berlin, and Bremen. Of the large states, Bavaria and Baden-Württemberg rank second and third on per capita GDP, trailing only Hesse. The five poorest states of Germany, on the other hand, constitute the former East Germany (with the exception of East Berlin). On Germany’s per capita GDP map, the Cold War division of the country is still strikingly evident after a quarter century of reunification. 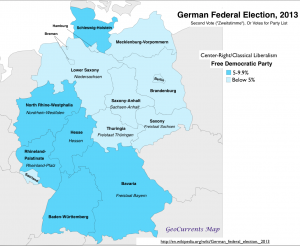 The much more detailed Spiegel Online map posted below, which shows constituency results for the “first vote” (in which voters opt for a specific candidate for the Bundestag, rather than a party) reveals some slightly different patterns. Here, for example, one can discern two centers of Social Democratic power, one in central Germany and the other in the industrial northern Ruhr. The Berlin inset map is also of note, as it shows strong support for the far left in the former East Berlin, and for the Green Party in central Berlin. Intriguingly, the Greens took two adjacent constituencies in the heart of the city, located on either side of the old Berlin Wall. As the BBC notes in an article arguing that the Cold War division of the city persists, these Green-voting areas “have been gentrified heavily, with large numbers of young, professional incomers.” 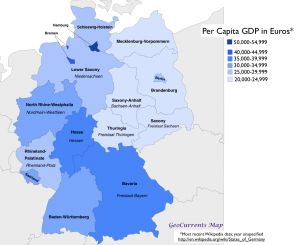 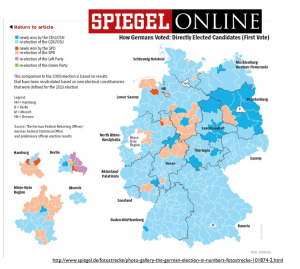 *The voting actually occurs simultaneously; the “first vote” is on the left-hand side of the ballot, the “second” on the right.