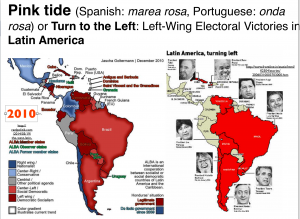 This’s week’s lecture for my class on the history and geography of current global events focused on the crisis in Venezuela, the slides from which are available at the link posted below. I framed this situation in terms of Latin America’s “democratic revolution” of the late 20th century followed by its electoral turn to the left (the so-called pink tide) in the early 21st century. In order to illustrate the latter phenomenon, I searched for maps showing the geographical extent of the “turn to the left” and quickly found a few. Most of these maps depict countries with “left” governments in red and “right” governments in blue; they do so for specific years, as with each national election the distribution of governing parties can easily change. Some of these maps also show the degree of leftward (or rightward) orientation of particular governments by using different shades of color, employing pink, for example, for center-left governments and darker hues of red for farther-left regimes. 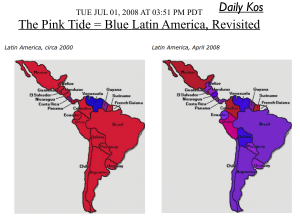 Such maps evidently prove confusing for some readers in the United States, who are accustomed to seeing electoral support for the center-left Democratic Party mapped in blue and that for the center-right Republican Party mapped in red. This usage, however, only goes back to 2000, and is generally limited to the U.S. The long-established international convention is to associate the political left with the color red. To translate the mapping of Latin America’s “pink tide” into the idiom of the United States, the website Daily Kos provided two maps in which the color scheme was reversed, proclaiming that the “Pink Tide = Blue Latin America.” The resulting maps are crude and not particularly accurate, but I have posted them here nonetheless.

My main problem with these maps, however, is not their crudity or inaccuracy, but rather that they seem to imply that a country with a far-left government, such as Venezuela, should be conceptualized like a “deep-blu”e U.S. state that generally votes for candidates from the Democratic Party, such as Massachusetts. As a result, I devoted part of my lecture to outlining criticisms of the standard one-dimensional political spectrum based on the left-right distinction. In the slides linked to below, one can find images of the competing “horseshoe” and “matrix” models, the former maintaining that the “ends” of the political spectrum converge, and the latter insisting on a two-dimensional political arena that differentiates social from economic beliefs. Another slides indicates that the manner in which such matters are conceptualized varies significantly from country to country and from region to region.

My own preference is actually that of a complex, multi-dimensional political space that acknowledges the fact that an individual can hold logically consistent beliefs on a great number of particular issues that that fail to mesh with either a one-dimensional spectrum or a two-dimensional matrix. Such a multi-dimensional scheme, however, would be too complicated for general use and too difficult to represent graphically. As a result, we must fall back on simplistic schemes, such as the left-right continuum, while recognizing their limitations. 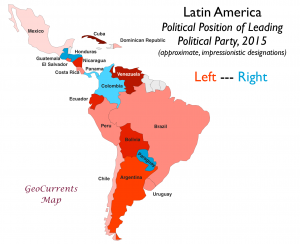 With such considerations in mind, I tried to map the current governments of Latin America along the left-right spectrum. Doing so, however, is anything but easy, as it requires the making of subjective judgments about the political complexions of particular governments. How far to the right, for example, is the government of Paraguay as compared to that of Panama? Both the Panameñista Party that currently governs Panama and the Colorado Party that current governs Paraguay are members of the Union of Latin American Parties, which proclaims its political position to be center-right. Historically, however, the Colorado Party seems to be more conservative in many ways that the Panameñista Party, and hence I have mapped it accordingly. But I am not at all certain about this choice, and I am far from pleased with the map. Please feel free to criticize as you see fit.

Next week’s lecture will examine the current situation in Ukraine and Russia.