Customizable Maps of France, and the New French Regions 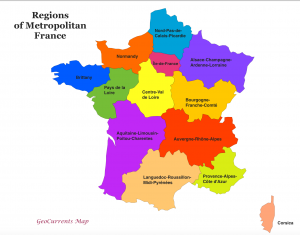 I mentioned late last year that GeoCurrents would be giving away a number of customizable maps made in easy-to-use presentation software (Keynote and PowerPoint). Thus far, this process of map distribution has been slow, both because that maps that I have made need to be fine-tuned and because I am always tempted to use these base-maps to map out particular phenomena, which is time consuming. As a result, for the next few weeks I will simply concentrate on delivering these customizable base-maps in relatively raw form. As before, the PowerPoint and Keynote files of these customizable maps are found at the bottom of the post. 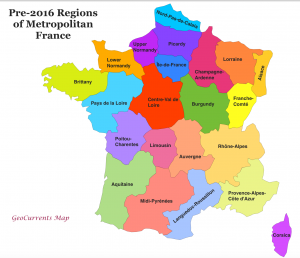 Today’s maps are of Metropolitan France, based on both its regions and its departments (these maps exclude, in other words, French overseas departments, which are fully part of the country) . Two maps of French regions are necessary, as France reformed its regional structure early this year. As explained in the Wikipedia:

In 2014, the French Parliament (the National Assembly and the Senate) passed a law that reduced the number of regions in Metropolitan France from 22 to 13. The new regions took effect on 1 January 2016.

The text of the law gives interim names for most of the new regions by combining the names of the former regions, e.g. the region composed of Aquitaine, Poitou-Charentes and Limousin is Aquitaine-Limousin-Poitou-Charentes. However, the combined region of Upper and Lower Normandy is simply called “Normandy” (Normandie). Permanent names will be proposed by the new regional councils and confirmed by the Conseil d’Etat by 1 July 2016. The legislation defining the new regions also allowed the Centre region to officially change its name to “Centre-Val de Loire”; this change was effective from January 2015. 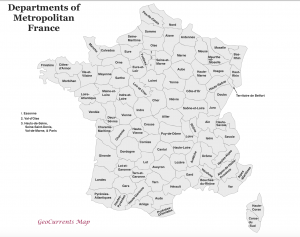 I find this change somewhat frustrating. First, the regional names will probably change, which will instantly make my map obsolete. More important, the reduced number of regions will reduce the resolution of maps based on these entities. To allow a finer level of resolution, I therefore mapped out the departments of France, which are numerous. After doing so, however, I discovered that there is little if any easily accessible data based on French departments. After spending a few hours looking for something of interest, I abandoned the quest.

As with the other customizable maps available at GeoCurrents, these maps of France come in several forms. One map, for example, merely has the shapes of the departments, one has the departmental names but not the shapes, and a third has both. All of these maps are easily manipulated by clicking on the shapes and names, which can then be recolored, dragged into new positions, and so on.