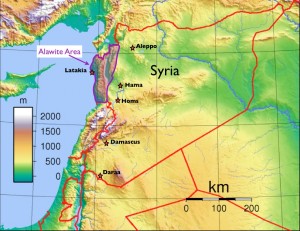 News stories about the recent demonstrations and reprisals in Syria routinely mention that the country’s government is dominated by members of the Alawite sect, but rarely describe Alawite beliefs and practices. Many mention only that the Alawites form a minority in primarily Sunni Syria, sometimes noting that the Alawite faith stems from Shi’ite Islam. A March 25, 2011 Guardian lesson on the “20 Things You Need to Know about Syria” adds that the Alawites are “a secretive religious sect usually regarded as an offshoot of Shia Islam.” In fact, all accounts agree that the Alawite sect grew out of Shi’ite Islam. What is highly controversial is whether Alawites today are Shi’ite Muslims, or indeed, any kind of Muslims at all. Hard-line Sunni fundamentalists often insist that Alawites are not just unbelievers, but are guilty of the unforgivable sin of shirk (polytheism or idolatry).

The controversies surrounding the Alawites focus on their theology. One school of Islamic thought holds that the faith is an unusual variant of Shiite Islam, yet still falls within the bounds of respectability. Those who emphasize the Muslim nature of the Alawites maintain that their aberrant practices have been exaggerated, and, more importantly, that they have been moving in the direction of orthodoxy over the past several decades. Others, however, stress the sect’s historically divergent beliefs and cast doubt on the recent transformation, regarding it largely as an example of taqiyya, or the practice of concealing one’s true faith to avoid persecution.

The Wikipedia article on the Alawite sect lays out the basic arguments about its status in Islam. Those who stress its heterodox nature emphasize the Alawite tenet that the “esoteric, allegorical” meanings of the Qur’an override its literal readings.  They likewise point out that Alawites “celebrate certain Christian festivals ‘in their own way,’ including Christmas, Easter, and Palm Sunday, and their religious ceremonies make use of bread and wine.” The article avoids mention, however, of the more irregular aspects often purported to Alawite belief, which are recounted in a number of websites devoted to orthodox Islam. As TurnToIslam frames it:

“Alawi doctrine is a mixture of Islamic, Gnostic and Christian beliefs. Some Alawi doctrines appear to derive from Phoenician paganism, Mazdakism and Manicheanism. But by far the greatest affinity is with Christianity. Alawi religious ceremonies involve bread and wine; indeed, wine drinking has a sacred role in Alawism, for it represents God. The religion holds Ali, the fourth caliph, to be the (Jesus-like) incarnation of divinity. The Alawis possess a range of distinctive doctrines which have led them to be treated as heretics and non-Muslims.”

The article goes on to enumerate these supposedly “distinctive doctrines,” including “rejection of the Qur’an,” “rejection of the five pillars of Islam,” “belief in incarnation,” “disbelief in resurrection,” and faith in astrology. It further maintains:

“The Alawis believe that all persons were stars in the world of light but fell from here due to disobedience. They believe they must be reincarnated seven times before they once again return to the stars where Ali is prince. A good Alawi will assume a better form after his death than a bad Alawi. The Alawis claim that the Milky Way is in fact the deified souls of the true believers. The less pious souls require more transformations. If an Alawi is sinful, he will be reborn as a Chrsitian [sic] until his atonement is complete. A bad Alawi will definitely assume a better form than a non-Alawi. Infidels will be reborn as animals.”

A number of English-language Islamic discussion boards have tackled the topic of Alawite standing within the faith (for instance, see the 2006 debate on ShiaChat). Appraisals are sometimes harsh. A denunciation of the Syrian-born critic of Islam Wafa Sultan in IslamicAwakening, for example, notes that her Alawite background “should explain everything – she was a Kafir from the beginning, never a Muslim.”

Whether or not most Alawites currently hold such decidedly non-Islamic tenets as reincarnation and “star-birth,” the crucial point here is that if significant numbers of Sunni fundamentalists believe this to be the case, the community could find itself in danger were the current Alawite-dominated government to fall. Extremists have targeted highly heterodox sects of Islam in many other parts of the world, and there is no reason to imagine they would not do so in Syria if opportunities arose. The repressive nature of the current Alawite-dominated regime, along with the periodic massacres** that it has perpetrated, would add fuel to the fire.

Some observers think that Syria’s government is incapable of riding out the current unrest. The New York Times reported on March 28, 2011 that a Western diplomat in Damascus, “speaking on the condition of anonymity in accordance with diplomatic protocol,” had flatly pronounced “it’s over; it’s just a question of time.” But considering the broader context outlined above, such a judgment may be premature. Not just the al-Assad clan but the entire Alawite Syrian political establishment has every incentive do everything possible to retain power. A relatively gentle Egyptian- or Tunisian-style political transformation, in other words, seems highly unlikely.

In this context, the demographic strength of the Alawites merits attention. The Guardian claims that the Alawis form a “tiny minority” of Syria’s population, yet the community numbers well over one million, or more than five percent of the country’s total population. Some sources posit much larger figures; the Wikipedia claims that “they were never estimated to be less than 20% of the Syrian population (which would be about 4 million people if true today).”* As many as 150,000 Alawites live in Lebanon, while Turkey may be home to 400,000 more. The sect might thus be regarded as small, but it is hardly “tiny.”

Syria’s Alawite community is concentrated in the geographically distinctive western coastal region, with a secondary concentration in Damascus. The Alawite region, unsurprisingly, has been a bulwark of the Assad regime. Yet recent anti-government protests in the coastal metropolis of Latakia—a mixed Sunni, Christian, and Alawite city—have been intense, and have been accompanied by bloodshed. A March 29 report from The Australian claimed that the city took on the appearance of a “ghost-town” after “unknown people in cars and on rooftops began shooting randomly at people…” According to the official Syrian news agency, most of the 200-odd people wounded in the attacks were government security personnel. Syrian officials blamed followers of the Qatar-based, media-savvy cleric, Youssef al-Qaradawi, as well as Palestinians from a nearby refugee camp. But many observers are skeptical. As The Australian reported:

“There is talk of possible attempts to divide residents who are members of the President’s minority Muslim Alawite sect—an offshoot of Shia Islam—and majority Sunni Muslims. One witness said groups of people had driven around Alawite-dominated villages on the city’s outskirts, spreading rumours that the Sunnis were about to attack them. ‘Then they drove to Sunni areas and told them the opposite.’”

*The same Wikipedia article also gives a figure of 1.35 million.

** In 1982, Syria’s former dictator, Hafez al-Assad – father of its current strongman – slaughtered some 10,000 people in the city of Hama in order to suppress an uprising of the Muslim Brotherhood.