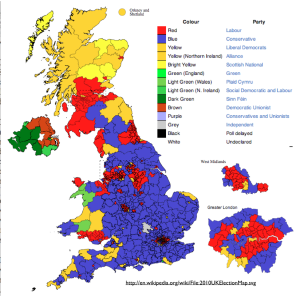 An interesting article in this week’s Economist examines Britain’s north/south electoral divide. The south, baring London, habitually votes for the Conservative Party, whereas the north generally opts for Labour. The article, quoting John Hobson, traces the division back to the 1800s, when a “southern ‘Consumers England’ of leisurely suburbs” was opposed to “a northern ‘Producers England’ of mills and mines.” The author claims that regional political disparities were reduced from the 1920s to the 1960s, but subsequently strengthened again. As the article notes:

The return of the split reflects the diverging economic experiences of the two halves of the country. Beginning in the 1960s changing industrial fortunes drove a wedge between the manufacturing-oriented north and the services-heavy south.

Over the years the Conservative Party has been expelled from most of the north of England (and almost all of Scotland). Labour has been virtually driven from the south. … The differences between them now go beyond economic circumstance—their cultural and political identities are ever more distinct. This represents a daunting but inescapable political challenge. 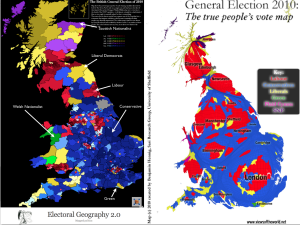 On a conventional electoral map, the north/south division outlined in the Economist article is rather vague. In recent elections, the Conservative Party has indeed carried most of the south, but it has also won many constituencies (as British electoral districts are termed) in northern England, some by strong margins. This pattern is clear on both the Wikipedia map posted above and the Electoral Geography 2.0 map posted here. Note that these figure, like most British electoral maps, use red for the left (Labour Party), blue for the right (Conservative Party), and yellow for the vaguely centrist (left-libertarian? center-left?) Liberal Democrats. On the Electoral Geography 2.0 map, purple indicates the Scottish National Party, and green the Welsh Nationalists (Plaid Cymru). The Green Party, which took one constituency, gets a different shade of green.

The general geographical patterns of the 2010 general election are clear. Labour was victorious in much of metropolitan London, in south Wales, in the industrial cities and mining areas of the Midlands and the north, and in the Scottish lowlands. The Liberal Democrats did well in the Scottish Highlands, in parts of central Wales, and across much of southwestern England, especially Cornwall. The Scottish Nationalist Party took a few areas in northwestern and northeastern Scotland, just as the Welsh nationalists took a few in western Wales. In England as a whole, and especially in the southeast, the blue hue of the Conservative Party dominates. 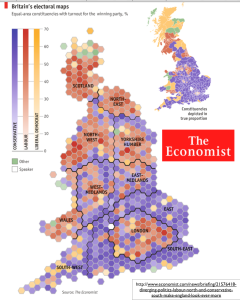 But as The Economist article explains, such mapping can be misleading, as it does not take into account population disparities:

On ordinary electoral maps the north-south divide is not as plain as it might be. Rural British constituencies are both big and nearly always represented by a Conservative or a Liberal Democrat. Thus swathes of the country will appear blue and yellow come what may. And Northern Ireland is represented by parties not seen elsewhere. If you look just at the mainland, though, and equalise the size of the constituencies, the binary reality becomes obvious (see map). Save for a belt of Tory hills and dales across North Yorkshire and the Lake District, the north is red—as are, barring nationalists, Wales and Scotland. The south is deep blue, strikingly so in the surrounds of London (it gets more Liberal Democrat to the west). Only in London and the Midlands do the parties seem to be in real competition.”

The Economist maps the demographically weighted electoral returns by transforming constituencies into hexagons of equal area. The map is effective,* but it does not fully capture regional demographic disparities, as constituencies vary in population from under 60,000 to over 80,000. The electoral cartogram found in the second figure above, entitled “General Election 2010: The True People’s Vote Map,” is perhaps more effective in this regard. Here it is clear that if one disregards greater London, southern England, and especially the southeast, is Conservative territory.  The few exceptions are not surprising: Luton, a traditional center of automobile manufacturing; Oxford, a University and industrial city; and the central urban areas of Bristol and Southampton. Unlike Oxford, the more high-tech-oriented university city of Cambridge went for the Liberal Democrats 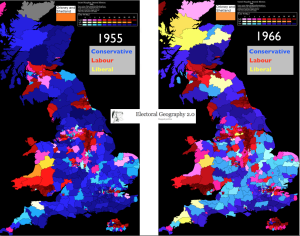 Overall, I am not fully convinced by The Economist’s argument that British regional voting disparities lessened significantly from the 1920s to the 1960s. In examining the maps posted on Electoral Politics 2.0 that go back to 1955, I am rather struck in by the consistency of the pattern, at least in England. (In Scotland, on the other hand, the Conservative vote, once pronounced in the south and north, has indeed collapsed, replaced by votes for the Liberal Democrats and the Scottish nationalists.) In England, to be sure, some elections trended in the Conservative direction (1987) and others in that of the Labour (1966), but “blue” constituencies tend to remain blue, just as “red” ones generally remain red. A few exceptions can be found; Merseyside (greater Liverpool) is definitely more Labour-oriented now than it had been in the 1950s. But overall, England shows little variation in electoral geography over this period. 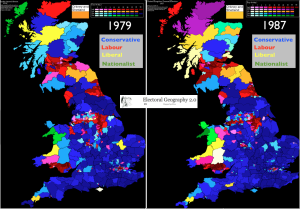 In the 2010 election, the parties that placed fourth and fifth by total votes, the UK Independence Party (UKIP) and the British Nationalist Party (BNP), did not win any constituencies, and hence are not represented on the map. The fast-growing UKIP, an anti-EU organization usually described as “right-wing populist” or “right-libertarian,” took 3.1 percent of the vote countrywide, while the far-right British National Party took 1.9 percent. Both parties had done much better in the 2009 European Parliament election, when UKIP astoundingly bested not just the Liberal Democrats but Labour as well, scoring 16.5 per cent of the total vote. In the same election, the BNP took 6.2 percent of the vote, while the Green Party gained 8.1 percent. Protest votes were no doubt important in this election. 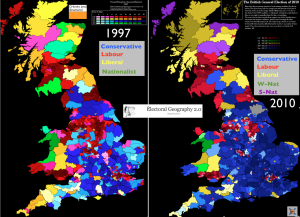 The geographical patterns of the two anti-EU rightwing parties in the 2009 European Parliamentary election are intriguing. As can be seen in the paired maps posted here, the hard-right BNP won most of its votes in traditional Labor strongholds, doing particularly well in such places as Stoke-On-Trent (“the Potteries,” a ceramic manufacturing district) and in the area immediately east of London. UKIP, on the other hand, did better in traditionally Conservative and Liberal- 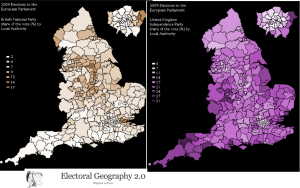 Democratic voting areas, such as those to the west of Birmingham and those in southwestern England. Neither party did well at all in central London, while both did well in the far eastern reaches of the London metropolitan area.

Most opinion polls looking ahead to the 2015 general election put the Labour Party in first place, ahead of the Conservatives by some six to eight percent. Most also put UKIP ahead of the Liberal Democrats, albeit by a narrow margin. In local council races to be held this May, many traditionally Conservative districts are expected to vote instead for UKIP. Conservative party leaders are evidently very concerned about the rise of this new rival to the right.

* The green color used for “other” parties in The Economist map is potentially misleading, as it covers both the Scottish and Welsh nationalist parties and the Green Party.  As mentioned above, the Greens took only once constituency—Brighton Pavilion in southeastern England. What then does the green hexagon in the western part of the Yorkshire-Humber region indicate? All other maps that I have examined indicate that the three major parties carried all of the constituencies in this region in 2010.