The Rural/Urban Divide in Catalonia’s 2015 Election

According to most media sources, the Catalan independence movement scored a major victory in the September 28 regional election, taking 72 out of 135 seats in Catalonia’s parliament (Parlament de Catalunya). More careful reporting, however, noted that the results were actually mixed. In terms of the popular vote, candidates advocating independence gained the support of less than half of the electorate. Had the vote been an actual plebiscite on soverienty, skeptics argue, the motion would have been defeated. But Artur Mas, the leader of the independence movement, offered a different interpretation, claiming that “the Catalan people have spoken”—and have spoken for independence. As he put it, writing in The Guardian:

On 27 September Catalonia’s voters went to the polls and with a record 77.4% turnout gave a win in every single electoral district to the political forces whose campaign promise was, if elected, that they would follow a “roadmap” towards Catalan independence from Spain. Pro-independence lists obtained 48% of the votes and 72 seats out of 135, whereas unionist lists got 39% of the votes and 52 seats. These plebiscitary elections were the only way possible to give the Catalan people the vote on the political future they have long called for, after the Spanish government’s longstanding refusal to allow an independence referendum.

The fact that the pro-independence vote and the Spanish-unionist vote together fall well short of 100 percent indicates the presence of a third option, that of enhanced regional autonomy without actual sovereignty. But this third “regionalist” option, which rests on a mixed sense of Catalan and Spanish identity, was favored by relatively few voters. According to a recent Politico article, this “middle ground” lost support in part “because the campaign was not based on a rational debate on whether it makes economic sense to have full fiscal autonomy or leave the EU, the eurozone or NATO. Rather, it pandered to nationalistic feelings and prejudices…” 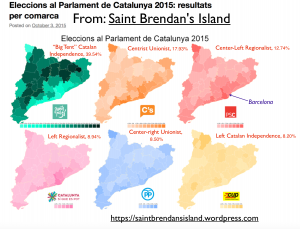 As mentioned in an Economist article, the pro-independence parties were able to gain control of the regional parliament without winning an outright majority due to “Catalonia’s unequal voting system, which favours less-populated rural areas.” The uneven electoral geography of the contest is clearly evident in a series of maps, posted on the website Saint Brendan’s Island, that show the percentage of the vote taken by the top six parties in each comarca (administrative division). I have amended these maps slightly by providing a crude characterization of the political philosophy of each of these groups (in red), along with their percentage of the vote across Catalonia. The leading contingent, an electoral coalition called “Together for Yes” (Junts pel Sí), is marked as “big tent” on the map because its constituent parties span a fairly wide range of political positions, falling both to the right and the left of center. The much less popular Popular Unity Candidacy party also favors Catalan independence but is situated too far to the left to have joined the “Together for Yes” coalition. 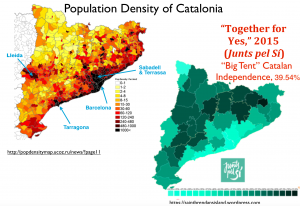 The second illustration, which juxtaposes a population density map with an expanded map of the “Together for Yes” vote, clearly shows the urban/rural electoral divide in Catalonia. The region’s most densely populated areas in general gave relatively little support to the independence movement, favoring instead the unionist and regionalist parties. One factor here is the presence of many migrants from other parts of Spain, who not surprisingly tend to support the unionist cause. In Barcelona, Spanish (or Castilian, as most Catalan nationalists insist) is the main language, and although three-quarters of the city’s inhabitants can speak Catalan, fewer than half are able to write in the language. Similar situations are found in the other major urban areas of Catalonia. As noted in the Wikipedia article on the historic city of Lleida: “After some decades without any kind of population growth, it met a massive migration of Andalusians who helped the town undergo a relative demographic growth.”