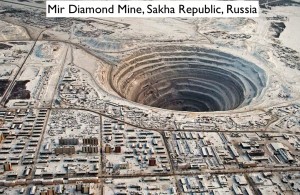 A number of websites provide lists of the “world’s largest holes,” most of which are gargantuan open-pit mines (given the realities of the internet, several of these sites are quasi-pornographic). Although the actual lists differ, several put Russia’s Mir diamond mine, located in Yakutia (Sakha Republic) in the first position. The Wikipedia article on the mine claims that it is actually “the second largest excavated hole in the world, after Bingham Canyon Mine.” But if Bingham Canyon is larger, Mir is much steeper, and therefore seems more impressive to many observers. It is large enough to create powerful downdrafts. According to the Wikipedia, “The airspace above the mine is closed for helicopters because of a few incidents in which they were sucked in by the downward air flow.”

525 meters (1,722 ft) deep with a diameter of 1,200 m (3,900 ft), the Mir Mine follows a diamond-bearing kimberlite deposit of a volcanic pipe. Active from 1957 to 2001, and closed for good in 2011, Mir produced roughly 2 million carats of diamonds annually. Russia’s first major diamond mine, Mir was opened in part for geo-strategic reasons. As explained in a fascinating article by Stephanie (no last name provided), posted in Abazias Diamonds:

The birth of the Mir Mine came out of Stalin’s desire to retain Soviet independence. After WWII, the Soviet Union required large quantities of industrial diamonds in order to rebuild its shattered landscape. The problem for the Soviets was that the diamond industry at the time was almost entirely controlled by DeBeers. What this came down to was the simple fact that should DeBeers decide to embargo the Soviet Union, whether for economic or political reasons, the Soviets would have to at least somewhat bend to DeBeers’ will.

Although focused originally on industrial diamonds, the Mir Mine was soon producing gemstones in prodigious quantities.  As Stephanie explains:

To DeBeers, the Mir Mine proved to be a strange and puzzling mystery. … DeBeers had been mining diamonds since the beginning of the century and knew a little of the normal production rates of kimberlite pipes. Most kimberlite pipes produce an ever growing quantity for the first few years, followed by a plateau and then a steady decline in diamond production. The Mir Mine seemed to break these rules, as the Soviets were showing ten million carats of diamonds produced a year by the mid-1960s, with two million carats of diamond a year being of gem-quality.