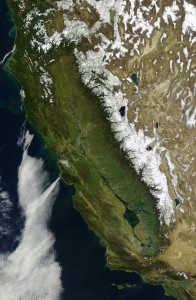 A previous GeoNote highlighted a collaborative effort to map historical changes in California’s Sacramento-San Joaquin RiverDelta. In a similar spirit, the fantasy satellite map shown at left, created by Central Valley geographer Mark Clark and noted by Frank Jacobs, imagines what the entire state might have looked like in 1851. Perhaps the map’s most salient feature is massive Tulare Lake, which dominates the Southern San Joaquin valley. Tulare Lake, now completely dry in all but the wettest years, once boasted a surface area of 1,780 square kilometers (690 square miles), making it the largest freshwater lake west of theMississippi River. The rain and melt water that fed the lake in times past now forms a vital input for California’s $36 billion agriculture industry.

Tulare Lake, along with the other extensive river and wetland systems depicted in the map, were drained in the late 19th and early 20th centuries near the end of a wetland-drainage movement that is as old as the country itself. In fact, much of America’s prime agricultural land in the Midwest was once wetland. As shown on the maps below, which were taken from a USGS report, the states of Iowa, Illinois, Missouri, Indiana, and Ohio—as well as California—have lost over 95 percent of their wetlands since European colonization, primarily to agriculture. Most of the changes in the East occurred during the 19th century.