The Satisfaction with Life Index 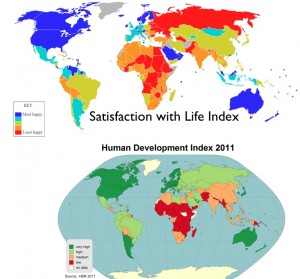 The Satisfaction with Life Index attempts to measure human happiness across the world, within the confines of national boundaries. The index is complex and highly subjective, and surely deserves further scrutiny. Taking it at face value, however, reveals some intriguing patterns. In general, “life satisfaction” correlates closely with economic and social development, as measured in the Human Development Index. A comparison of the two maps, however, shows some notable exceptions. The former Soviet countries — and the former Communist zone of Eastern and Central Europe more generally — shows lower levels of happiness than might be expected on the basis of socio-economic status. Countries with higher than expected happiness levels include Suriname, Bhutan, Vanuatu, Solomon Islands, and Timor Leste. It is difficult to discern any patterns here, although it is notable that many island countries show high levels of satisfaction. It may also be significant that Bhutan has explicitly sought to enhance “Gross National Happiness” rather than Gross National Product. Considering the high levels of domestic violence in the Solomon Islands, I am especially skeptical about its placement on the index.