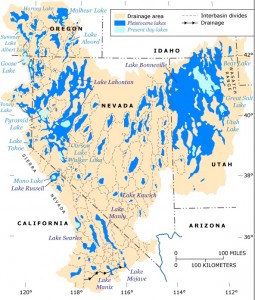 Several recent GeoNotes on lakes and their islands mentioned only currently existing lakes. If one goes back into the Pleistocene epoch, however, the situation was very different. 18,000 years ago, some of the world’s largest lakes were located in the Great Basin of western North America. Today, only remnants exist, although several, most notably Utah’s Great Salt Lake, are still substantial. Note that Lake Lahontan contained a huge island, which itself contained several smaller lakes.

The presence of these Pleistocene lakes was due much more to reduced evaporation, owing to much cooler summer temperatures, than from increased precipitation. Over time, these lakes exhibited huge fluctuations. Evidence suggests that Lake Bonneville “evaporated and reformed as many as 28 times in the last 3 million years.”