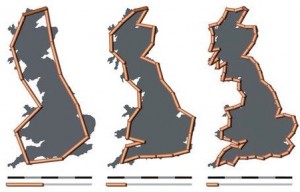 “How long is the coastline of X?” is a famously impossible question, as the answer depends on the scale of resolution. Due to the intricacies of fractal geometry, rugged coastlines grow much longer the more one focuses in on them, as Benoit Mandelbrot demonstrated in his noted 1967 article, “How Long Is the Coast of Britain? Statistical Self-Similarity and Fractional Dimension.” As the first sentence of Mandelbrot’s abstract puts it, “Geographical curves are so involved in their detail that their lengths are often infinite or, rather, undefinable.”

The Wikipedia article called “List of Countries by Length of Coastline” begins by admitting the problem: “The coastline paradox states that a coastline does not have a well-defined length.” The article goes on to include, however, two lists of coastline length, one compiled by the CIA World Factbook, the other by the World Resources Institute. It is amusing and instructive to compare the two lists, as doing so immediately verifies Mandelbrot’s point. The World Resources Institute, for example, puts the United States in the second position, with a coastline 133,312 kilometers, whereas the Factbook puts it in eighth pace, just below Norway, with a coastline of 19,924 kilometers. A similar gap is encountered in the case of Chile’s coastline, which the World Resources Institute puts down at 78,563 kilometers (fifth place), whereas the Factbook gives a mere 6,435 kilometers (nineteenth place, just above Croatia). 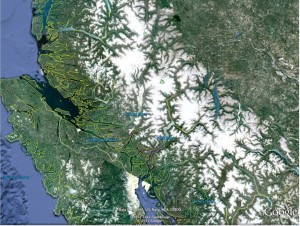 The two sources do, however, agree about the world’s coastline leader: Canada by a huge margin. According to the World Resources Institute, Canada’s 265,523-kilometer coastline is roughly twice the length of that of second-place United States, whereas the Factbook gives a figure of 202,080 kilometers, roughly four times that of second-place Indonesia. According to both lists, the shortest coastline of a reasonably sized sovereign state (excluding Monaco, in other words) is that of Bosnia and Herzegovina, at 20 kilometers (or is it 23 kilometers?), which is slightly shorter than Jordan’s 26 kilometers (or is it 27 kilometers?). 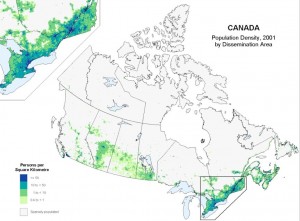 Canada’s long coastline is very lightly populated: high densities are found only in the extreme southwest and moderate densities only in the southeast; otherwise, the coastline is almost deserted. Of Canada’s twelve largest metropolitan areas, only Vancouver is situated in a coastal location. The sparse settlement of Canada’s coast is related to its length, as most of it is rugged and deeply indented. The Google Earth image posted above shows a segment  of the Canadian Canadian coastline, conveniently outlined in yellow, on Vancouver Island and nearby sections of the mainland.

Due to its sparse population and rugged character, Canada’s coastline might be regarded as having relatively little significance. Natural Resources Canada, however, disagrees. Asking its readers “why is our coastline so important?”, the site goes on to claim that “one-third of Canada’s Gross National Product (GNP) is generated by activities that in one way or another use the coastline either directly or as a transportation route.” I would like to see the underlying figures, as such a claim strikes me as greatly exaggerated.