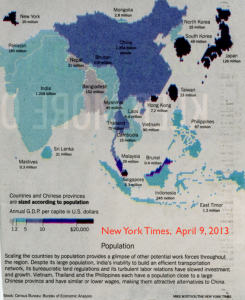 An interesting story in today’s (April 9) New York Times—“Hello, Cambodia: Wary of Events in China, Foreign Investors Head to the South”—is illustrated in the print edition with two striking cartograms of eastern Asia, one of which shows population and the other economic output. The cartogram legends claims that “countries and Chinese provinces are sized according to population” and, respectively to “economic output.” Actually, they are not. On the population cartogram, for example, compare the sizes of Hong Kong and Taiwan with that of Thailand. Is Thailand shown as almost ten times larger than Hong Kong and almost three times the size of Taiwan, as an accurate depiction would have it? Hardly. 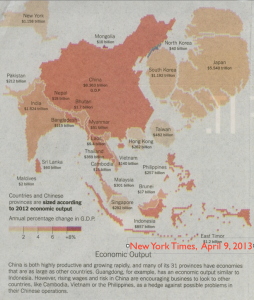 The real problem with the maps, however, is the claim that Chinese provinces are also sized according to these metrics. In actuality, it appears that no efforts were made to depict China’s first-order internal divisions (which include autonomous regions and direct-controlled municipalities in addition to standard provinces) in the manner of a cartogram. If this had been done, China would not retain its familiar shape, as can immediately be seen on an actual population cartogram of the country, produced by Worldmapper. On an economic cartogram, the shape distortion would be even more pronounced, as production is concentrated in the coastal provinces. As the Economist map shows, the GDP of the Tibetan Autonomous Region is roughly equivalent to that of Malta. 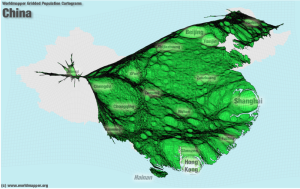 The New York Times cartograms also seemingly imply that Hong Kong is an independent country, rather than a “special administrative region” of China. 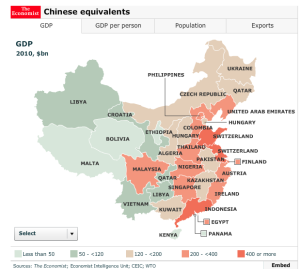