The Geography of the 2012 Illinois Republican Primary 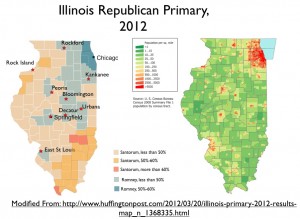 The geographical patterns in the recent Republican presidential primary in Illinois are quite clear. As can be seen by comparing the two maps, Mitt Romney triumphed in most urban and suburban parts of the state, doing particularly well in the Chicago metropolitan area, whereas Rick Santorum did very well in rural counties, particularly in the southeastern part of the state, an area with a somewhat southern cultural background. Exceptions to this pattern include Rock Island County in the northwest, Madison County in the center-west, and Tazewell County to the south of Peoria, which are all relatively urban or suburban, yet voted for Santorum.