Websites designed to help expectant parents find the perfect baby name abound on the Internet, offering statistics on the most popular names by year and sometimes by country or state. A few sites, such as The Baby Name Wizard and NameTrends.net, even have maps of name popularity past and present for each American state. While these maps may be helpful for future parents, they also yield fascinating insights about American demography and culture. 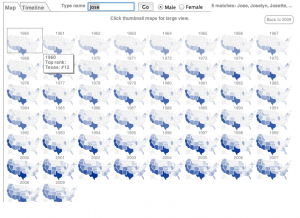 For example, the interactive maps from The Baby Name Wizard showing popular Spanish boys’ names suggest not only greater concentrations of Spanish speakers in states such as California, Texas, Arizona, and Florida, but also the growth of Latin American immigrant communities in the United States over the past five decades. A collection of thumbnail-sized maps about the popularity of the name “Jose” from 1960 to 2009 shows blue patches darkening across the Southwest as well as spreading northward and eastward, indicating its increasing frequency and implying expanding prevalence of Spanish. In 1960, Jose was the twelfth most popular boy’s name in Texas and the fifty-first in California; in 2009, it was the single most popular in Texas and the fifteenth in California. Both states, along with others where many infants receive Spanish language names, also have large Hispanic populations.

Baby Name Wizard makes note of regional trends with a map that breaks America down into groups of states with similar naming patterns. The website’s creator, Laura Wattenberg, states that even though certain names are popular throughout the country, some are much more common in some states than elsewhere. Examples of regions include the Spanish South, which includes Texas, California, and Florida; the so-called neotraditional states of New England and the Mid-Atlantic, where “Molly,” “Julia,” and “Nicholas” are popular; and the Creative Fringe, where “Nevaeh” (“heaven” spelled backwards”) and “Josiah” are more common. On NameTrends.net, searches for the names “Edward” and “Peter” provide some further evidence for the claim to a neotraditional region. While baby boys throughout the United States received these names in 1960, they more often were given them in the Northeast. By 2009, for example, “Edward” and “Peter” had dropped off the list of the top 100 names in most states, though they remained in New York, New Jersey, and parts of New England.

Both websites’ maps demonstrate that even while Americans have become ever more mobile, baby name trends retain unique, regional flavors. Unfortunately, the maps limit viewers to popularity at the state level and to statistics about the most common names. Even more fascinating would be maps showing statistics at the county level or about less common names, especially ones popular in different immigrant communities.