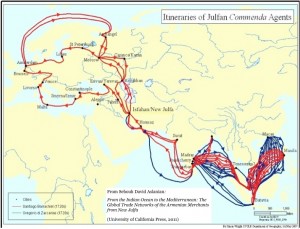 In the field of world history, the idea of the “trade diaspora” looms large. Before the development of modern transportation, communication, and finance, long-distance merchants not only had to develop skills in cross-cultural negotiation, but also had to establish the trust with one another that would allow them to move goods and money over vast distances. In the mercantile diaspora model, certain ethnic groups are viewed as having developed specializations in both long-distance trade and the cultural brokerage services that it demanded, deriving trust with their fellow merchants largely by virtue of belonging to the same ethnic community. In the early modern Eastern Hemisphere, the most important of such trade diasporas was probably that of the Armenians, as was explored in a previous GeoCurrents post.

In an important new book, Sebouh David Aslanian shows that the actual situation faced by Armenian long-distance merchants in the early modern period was rather more complicated than that. In From the Indian Ocean to the Mediterranean: The Global Trade Networks of the Armenian Merchants from New Julfa, Aslanian is able to trace out in great detail the activities of a number of individual merchants, thanks in good part to his discovery and analysis of a large trove of primary documents. As he demonstrates, trust did not flow naturally from Armenian cultural solidarity. The Armenians merchants based in New Julfa, a suburb of the Persian capital of Isfahan, generally trusted only fellow New Julfans, not other Armenians. As a result, Aslanian argues, their activities formed not an ethnically based trade diaspora, but rather a mercantile network, one with a primary hub (New Julfa), a number of nodes, and many spokes. He further shows that trust demanded much more than a common upbringing in New Julfa. Wealthy financiers entrusted their agents, who might trade and travel for decades, with large amounts of cash, and hence demanded accountability. Family members of wandering merchants were sometimes treated essentially as hostages back in New Julfa. And when an agent finally returned, he had to present detailed account books to his sponsor; if his sums failed to square, he could be subjected to the bastinado—the torture of having the soles of his feet beaten, an excruciatingly painful procedure. Aslanian also shows how gossip about merchants’ reputation helped the system function smoothly. Due to the presence of overlapping networks, one mercantile in nature, another run by the Armenian Apostolic Church, information about the activities and trustworthiness of individual merchants circulated widely.

From a purely geographical point of view, one of Aslanian’s most important contributions is his literal mapping out of the travels of two particular New Julfa merchants. He was able to construct this map due to the diligence of the Spanish Inquisition in the Philippines. When Armenian merchants arrived in Manila, where Peruvian and Mexican silver was very profitably exchanged for Chinese silk and porcelain, many chose—quite conveniently—to convert to Roman Catholicism, which required meeting the inquisitors. The office of the Inquisition would then record the converts’ life histories, providing Aslanian with the data necessary to construct this remarkable map.

Note how widely these two particular merchants traveled. Both went back and forth among Manila, Canton, and southern India on several occasions. More remarkable was the fact that one of the individuals also journeyed extensively in Europe and Russia, sailing twice from Amsterdam to Archangel. This map surely deserves a place in world history textbook alongside those of other noted travelers of the pre-steamship age, such as Ibn Batutta and Zheng He.