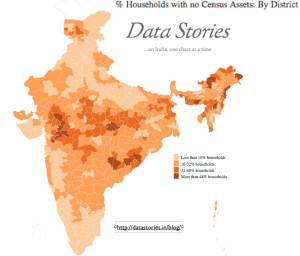 Data Stories (“… on India, One Chart at a Time”) recently published some intriguing maps and other visualizations of poverty and wealth in India. Its poverty map, posted here, shows households that “don’t own any of the assets listed on the census forms – that means no phone, no TV or radio, and no vehicle of any kind…,” a category that encompasses 18 percent of Indian households nationwide. This map deviates from more conventional maps of poverty in India in several regards (see the Pinterest map posted below). A number of districts in Kashmir in the north and in India’s far northeast (particularly in Nagaland) show much more deprivation on the Data Stories assets map than on the Pinterest poverty-line map. Uttar Pradesh in north-central India, on the other hand, appears much better off on the assets map than on the poverty-line map, as do some districts in northern Tamil Nadu (in the southeast). 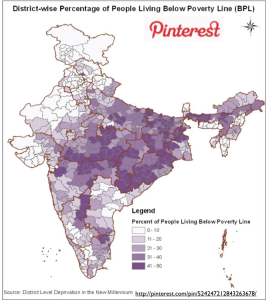 Particularly striking on the Data Stories map is the depiction of a belt of extreme poverty in west-central India, where the states of Gujarat, Rajasthan, Madhya Pradesh, and Maharashtra converge, an area near some of India’s most prosperous cities. The explanation of this belt, however, is clear, as it closely tracks the territory of the Bhils, a so-called tribal (or Adivasi) people some twelve-million strong. In several parts o 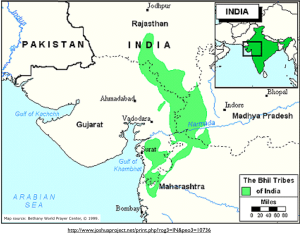