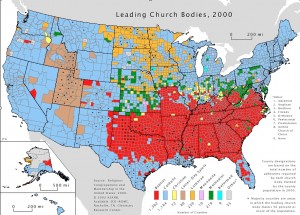 Most detailed maps of religion in the United States depict the leading denomination of each country, as in the first map here. Here one can see a Baptist belt in the southeast, a Mormon region in the central part of the west, a Lutheran Zone in the center-north, and a vast area of Roman Catholicism spread over most of the rest of the country. California here appears solidly Catholic, with only its two most sparsely populated counties, Alpine and Sierra, having a different “leading church body.” 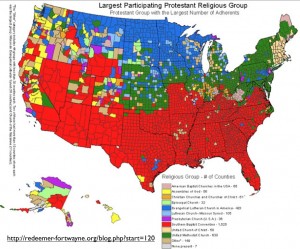 If Roman Catholics are removed from the picture and only Protestants are considered, a very different map emerges. Note that the Mormon region as well as the Catholic zone disappears from this map, as Mormons generally do not consider themselves to be Protestants. Although I cannot vouch for the accuracy of the map, the patterns that it shows are intriguing. Note that most of Southern California, along with most of the Southwest, joins the Southern Baptist region. Clear Methodist and United Church of Christ zones appear as well. But what is most striking is the area of pronounced county-level diversity, which stretches from Northern California through the Pacific Northwest, including Colorado as well. I find it striking that in this relatively secular area, the leading denomination of many counties is the Assemblies of God, a conservative Pentecostal sect noted for its practice of “speaking in tongues.” California’s Central Valley in particular shows a distinct concentration of Assemblies of God adherents.