Punjabi and the Problems of Mapping Dialect Continua 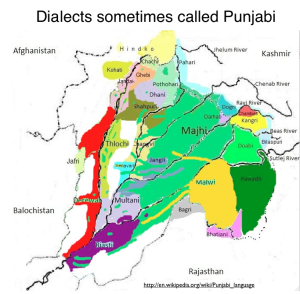 The Wikipedia list of the world’s most widely spoken languages, by mother tongue, puts Punjabi in tenth place, with its roughly 100 million native speakers exceeding the figures given for German, French, Italian, Turkish, Persian and many other well-known languages. The Wikipedia article on the Punjabi language stresses its growing appeal, noting that, “The influence of Punjabi as a cultural language in Indian Subcontinent is increasing day by day mainly due to Bollywood. Most Bollywood movies now have Punjabi vocabulary mixed in, along a few songs fully sung in Punjabi.”

But despite Punjabi’s obvious importance, it is extremely difficult to find a map of the language on the internet. Partly this is due to the fact that Punjabi spans the India-Pakistan border, and most maps of individual languages are country-based. One can thus find many language maps of India that depict Punjabi, and virtually all language maps of Pakistan do so as well. But on Pakistani language maps, the area covered by Punjabi has been diminishing in recent years. Maps made in earlier decades typically showed virtually all of northeastern quadrant of the country as Punjabi-speaking, whereas many recent maps retain the Punjabi label only for the core zone of this region. On these maps, what used to be the southern Punjabi area is now typically mapped as Saraiki-speaking, whereas the north is depicted as Hindko-speaking. Saraiki and Hindko, moreover, are sometimes merged together as the Lahnda language, sometimes called “Western Punjabi.” This linguistic reclassification scheme, however, is quite controversial, especially in Pakistan. Here Punjabi partisans are often irritated by the diminution of their language, whereas locally based scholars are happy to see their own speech-forms elevated to the status of separate languages.

Such controversies stem from the fact that Punjabi forms a dialect continuum, which means that adjacent dialects may be virtually identical, but the farther one travels, the more distinctive they become. As a result, dialects on the opposite sides of such a continuum may be non-mutually intelligible, and hence separate languages by standard linguistic criteria, yet no clear language boundaries can actually be located. The Punjabi dialect continuum is further complicated by the fact that it merges with the Hindi dialect continuum in northern India and with the Sindhi dialect continuum in southern Pakistan. To a certain extent, one can thus imagine a much larger dialect continuum stretching across most of northern South Asia. The standardized form of Hindi is a completely different languages from standardized Punjabi, but on the margins the situation is not always so clear-cut. The presence of Urdu adds yet another layer of complexity.

A relatively new Wikipedia language map (dated January 31, 2013) deals with these issues by mapping local dialects in the Punjabi-speaking area in both Pakistan and India. The caption of this map found on the “Punjabi Language” Wikipedia article (but not on other Wiki articles that use it) is delightfully honest: “Dialects Sometimes called Punjabi.” Note that on this map “Hindko” is highly restricted, whereas “Saraiki” does not appear at all. One must wonder how much sub-dialectal variation is found in some of these mapped dialect areas, particularly in the elongated Derawali zone (colored red on the map).

The Wikipedia article on Derawali  indicates that a certain degree of linguistic convergence is now occurring: “Today like all other dialects in Punjab, a process of unification and getting closer to Standard Pakistani Punjabi (Urdu influenced Majhi written in Shahmukhi) has made it [Derawali] quite similar morphologically, syntactically and mutually intangible with Standard Punjabi.” The lexical table provided in the same article, however, makes Derawali seen quite different from standard Punjabi. Whereas in the latter, the English words “boy, girl, woman, and man” are rendered “Munda, Kuri, Znaani, Aadmi,” in Derawali they are given as “Chohr, Chohir, Aurat, Mard.”