As recently highlighted on the weblog Per Square Mile, amateur geographer Crystal Dorn has mapped county-level U.S. data on official disasters from the Federal Emergency Management Agency (FEMA) and published it as a webGIS. Taking this map at face value, it seems that 54 years has not been enough time for clear patterns to emerge when each county is shaded according to the most prevalent type of disaster within its borders.

Looking at the data from 1959 through 1992, more or less the entire country is dominated by flooding, drought, or snow-related disasters. Including the period from 1992 to 2003 makes the entire Southwest a fire-dominated zone, while flooding ceases to be a dominant disaster in much of the East. The dataset clearly runs into a crippling problem during 2005, when nearly the entire country—even Eureka County, Nevada—becomes a Hurricane Katrina “evacuation zone”. Perhaps those who faulted FEMA’s response to Katrina in 2005 should reconsider their position in light of the negligible death toll in such “hurricane-stricken” places as Cherry County, Nebraska and Wayne County, Michigan. More seriously, though, the changing face of the pre-Katrina national disaster map underlines the problems inherent in insuring against disasters of wide geographic range and low frequency. If the really severe floods or fires come barely once a generation, how does one manage the risk? 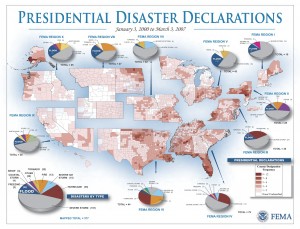 A more tractable graphic (displayed here) from the FEMA website showing disaster frequency by county from 2000 through 2007 and breaking disaster type down by region appears to make much more sense. For the country as a whole, severe storms, hurricanes, floods, ice storms, and fires lead the way in frequency. Florida in particular looks like a dangerous place to live.

For anyone interested in keeping up with current disasters, FEMA maps them in real time on the Census Bureau website.