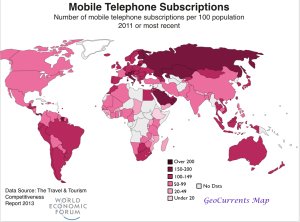 It is often noted that inexpensive cellular telephones have revolutionized communications across much of the world, especially in poor countries that lack landlines. Confirmation of this development is found in the World Economic Forum’s 2013 Travel and Tourism Competitiveness Report, which features detailed data tables for 140 countries. According to the report, 80 countries have more mobile telephone subscriptions than people. The United States, Canada, and France are not among them. Over most of the world, levels of economic development correlate poorly with cell phone subscription levels.

I have mapped the mobile telephone data to make the geographical patterns immediately evident. As can be seen, high subscription rates are found across much of the former Soviet Union and in the Arabian Peninsula, and more generally in Central and Eastern Europe and in South America. Hong Kong, however, has the highest figure (214.7), followed by Saudi Arabia, Panama, Montenegro, Russia, and Suriname. Such extremely high subscription rates are likely linked to the widespread use of inexpensive disposable phones. In Russia, moreover, people often keep different phones or, more commonly,  different SIM (subscriber identity module) cards, for personal and business purposes, and many purchase local phones when traveling.

Cell phone subscription levels are lower than average across much of Asia and Africa. Yet even in countries as poor as Mali and Zimbabwe, the figures are still relatively high, at 68 and 72 subscriptions per 100 people respectively. In only two countries, Burundi and Ethiopia, is the figure below 25 percent, although several unmapped countries, such as DR Congo and Central African Republic, could well have lower rates. 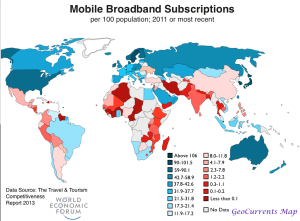 The situation is quite different in regard to mobile broadband subscriptions, as can be seen in the second map. Here subscription rates range from negligible (fewer than 0.1 per 100 people) across most of Africa and South Asia to a high of 114 in Singapore. South Korea and Japan also boast more broadband mobile subscriptions than people. It is significant that Germany, France, and Italy lag behind Poland, the Czech Republic, and Russia in this regard. The high figure for Ghana is also noteworthy.