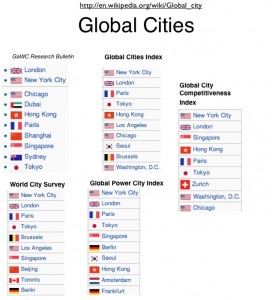 The concept of the “global city” (or “world city”) has gained traction over the past several decades. The original formulation was rather vague, but a number of more rigorous definition have emerged. A commendable Wikipedia article provides lists of top global cities derived from five ranking systems, as can be seen in the table posted here. 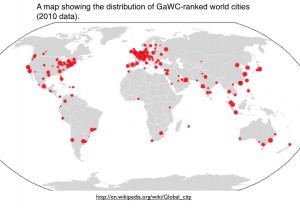 The Wikipedia article in question pays particular attention to the scheme developed initially in 1998 by the World Cities Study Group and published in GaWC Research Bulletin 5, which ranks cities from “Alpha++” (London and New York) down through “Gamma-” (which includes the likes of Muscat, Ljubljana, and Guayaquil). New versions of this ranking system continue to appear; the Wikipedia map posted here shows the 2010 account. The GaWC rankings often appears in Wikipedia articles—the one on Wellington, NZ, for example, notes its status as a gamma-level global city. In the Wikipedia map that illustrates the “global cities” article (reposted here), the higher levels are poorly differentiated, making hard to tell an alpha+ ranking from a beta+, let alone an alpha-. I have therefore remapped the alpha and beta cities, showing their respective categories by circle size. 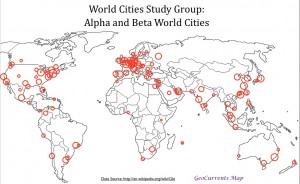 As both maps indicate, the “global cities” in the GaWC scheme are heavily concentrated in North America, coastal Asia, and especially Western Europe. The European domination of the list is especially clear in the GeoCurrents map. Both maps also indicate the paucity of world cities in Africa. The Wikipedia map illustrates this pattern especially well, as the region has only two third-level (or “gamma”) world cities, Accra and Durban.

Like any numerical index, that of the World Cities Study Group does not capture all aspects of global urbanism. Certain features are selected for measurement but others are by necessity ignored. As a result, some cities seem much too low—or high—on the list. Is the capital of Mauritius, Port Louis, with all of 148,000 residents, really a more “global city” than St. Petersburg, with a population of 4,879,000? Yet the scheme gives St. Petersburg a gamma status, two categories below “beta-” Port Louis (Denver, San Juan, and Casablanca are also ranked at beta-). St. Petersburg’s standing is probably depressed by Russia’s obstacles to globalization. Yet Moscow does rate an “alpha” standing, placing it just below the top ten (which is composed of “alpha++” and “alpha+” cities). In most other raking systems, Moscow’s position is lower. In the Global Cities Index it is bested by San Francisco, Madrid, and Vienna, and in the Global City Competitiveness Index it comes in 58th, between Lisbon and Tel Aviv. 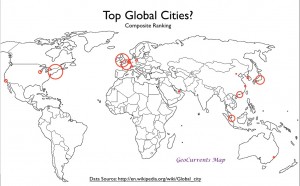 Disparities among the “global cities” listed in the different ranking systems covered by the Wikipedia article are pronounced. All agree that New York and London occupy the top slots, and all place Paris and Tokyo in high position, but beyond that they differ greatly. Cities such as Dubai, Seoul, and Los Angeles occupy highly variable positions. To demonstrate such lack of agreement even in regard to the highest-ranked cities, I have mapped them out in the final figure. Circle size indicates the combined ranking derived from the five lists. For each list, the top ten cities were assigned values from 1 to 10; a 10th place standing was given one point, whereas a first-place position gained ten points. The total points from each table were then added, with a circle of the corresponding size placed on the map. As New York ranked first in all five lists, it is depicted with a 50-pixel circle; as London tied with New York in one scheme (giving both cities 10 points) and came in second place in all others, is depicted with a 46-pixel circle. Frankfurt is portrayed with a one-pixel circle, as it occupies tenth position on one list.*

*Four of these lists give a “one through ten” ranking, whereas the GaWC system gives just two rankings for the top ten cities, “alpha++” and “alpha+.” For this system, New York and London were each given 10 points, whereas the eight alpha+ cities were all given 5 points.