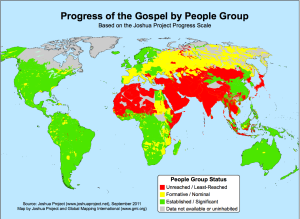 It is difficult to find maps depicting religious adherence in areas outside of the historical boundaries of the major universalizing faiths, such as much of sub-Saharan Africa and Oceania. Many such places, however, are characterized today by profound religious change, as missionaries seek converts and as syncretic forms of worship emerge. Some proselytizing organizations, however, maintain intricate maps of their own activities. One prime example is the Joshua Project, an evangelical organization that defines itself as “a research initiative seeking to highlight the ethnic people groups with the fewest followers of Jesus Christ.”

The Joshua Project’s world map of “Gospel Progress,” posted here, is extraordinarily precise, although its accuracy is questionable. The map makes it seem as if a significant Christian evangelical community has been established virtually everywhere in Amazonia, the Congo Basin, and Highland New Guinea, with only a few small red splotches indicating “unreached” or “least reached” populations. Such a scenario seems unlikely, considering how remote some of these areas are, although it is undeniable that Christian missionaries have been highly active in many such places. The map is difficult to interpret, however, as it does not indicate how the three major categories are determined, leaving us to wonder what differentiates a “formative” from an “established” evangelical presence. Other maps on the same site, however, provide the necessary information. As it turns out, the thresholds set are relatively low, as a mere two-percent evangelical adherence rate is enough to place a region in the “significant/established church” category (see the map of Indonesian New Guinea below). 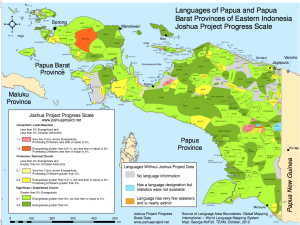 The map’s most basic pattern is clearly evident: Joshua Project outreach has made almost no progress in areas of Muslim, Hindu, or Buddhist heritage, and has fared poorly across most of Europe and Russia. Although unnoted on the map, areas in Muslim countries marked as having been successfully evangelized, such as parts of Egypt and Indonesia, almost certainly indicate missionary activities among local Christian (or, in the case of Indonesia, animist) minorities, not among the Muslim majorities. Many of the areas mapped as evangelized in Egypt, moreover, are essentially unpopulated. The manner in which the Joshua Project subdivides the world for its mapping purposes is specified elsewhere on the website. The basic unit is labeled the “people group,” and is defined as follows:

For evangelization purposes, a people group is the largest group within which the Gospel can spread as a church planting movement without encountering barriers of understanding or acceptance” (Source: 1982 Lausanne Committee Chicago meeting.)… In most parts of the world lack of understandability acts as the main barrier and it is appropriate to define people group primarily by language, with the possibility of sub-divisions based on dialect or cultural variations. Such a list may be referred to as an ethno-linguistic list of peoples. In other parts of the world, most notably in portions of South Asia, acceptance is a greater barrier than understandability. In these regions, caste, religious tradition, location, and common histories and legends may be used to identify the primary boundary of each “people group. 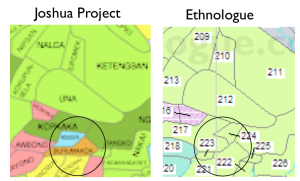 A close analysis of another map on the website, that showing the Indonesian part of the island of New Guinea, reveals that in this area “people groups” are indeed defined on a linguistic basis, more specifically as mapped by the Ethnologue, a standard reference source that is also associated with Christian missionary efforts. As can be seen in the paired maps posted here, the Ethnologue depiction of the east-central portion of this area is close to but not identical with that found on the Joshua Project map. It is unclear whether the discrepancy is due to the use of older Ethnologue maps by Joshua Project cartographers, or whether the Joshua Project actually defines Papuan “people groups” independently of the Ethnologue in some circumstances.