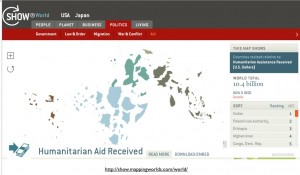 The website SHOW World offers an innovative cartographic portrayal of our planet. It allows one to instantly generate cartograms for a number of social, economic, political, cultural, and environmental indicators. As one moves from one measurement to another, countries grow and shrink, depending on the rankings they receive. 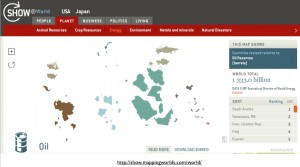 Some of SHOW World’s maps are particularly interesting. On the map of Humanitarian Aid Received (shown above), for example, it is instructive to compare tiny India to massive Sri Lanka. The large size of the West Bank and Gaza Strip is also notable, as is the expanse of Zimbabwe. The fact that a united Sudan is shown in the top position indicates that the data is dated (2009 in this case). The fact that the site’s base map also shows a united Sudan is less excusable. 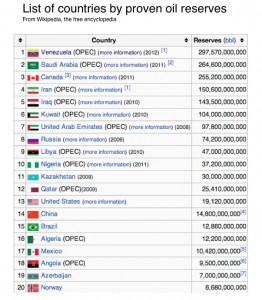 As is always the case, data reliability is a major problem for many of the maps. In some cases, good data is simply unobtainable; in other cases, data must be up-dated more frequently than is convenient. Consider, for example, SHOW World’s depiction of global oil reserves, which puts Saudi Arabia in the top position and portrays Canada well below Kuwait. Such information is seriously out of date. According to the most recent data, Venezuela has the world’s largest oil reserves, and Canada just barely trails Saudi Arabia. Venezuela’s oil-reserve surge has 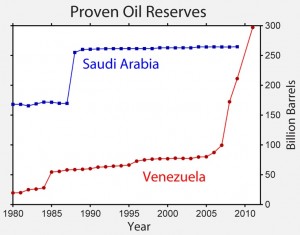 admittedly been fairly recent, but it has been accepted by most authorities .