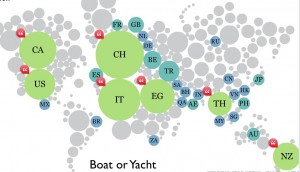 The British banking giant HSBC runs a sophisticated interactive website called The Expat Explorer that helps well-off professionals who work abroad determine the quality of life across much of  the world. The site is based on extensive surveys with such expatriates. As the website explains, “In 2011 over 3000 expats answered questions relating to their finances, quality of life and even what it’s like to raise children abroad.”

The widely used site has some useful information, but its problems run deep. To begin with HSBC’s publicity campaign is disingenuous. A YouTube advertisement for the site, for example, emphasizes its broad appeal, trumpeting the fact that  “over 200 million people worldwide have decided to start a new life overseas.” The actual Expat Explorer, however, has little significant information for the vast majority of those 200 million. One of its questions, for example, asks about the opportunities for yachting in the various countries surveyed — one of the few categories in which the United States does relatively well. 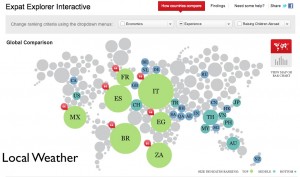 As can be seen from the yachting illustration posted above, the Expat Explorer uses a bizarre global map, one on which the shape of the world’s terrain is suggested by circles of various sizes. Most of these circles have little significance, as only a few dozen countries are surveyed—most of the world is actually ignored. On the interactive maps, the sizes of the circles representing countries grow or shrink depending on how the country in question ranks in regard to any specific indicator. As a result, geographical relationships are severely distorted. On the Yachting map, for example, Europe is dominated by huge inflated Switzerland (labeled, oddly, “CH”), which forces France roughly into the spatial position occupied by Iceland.

Beyond its cartographic infelicities, the Explorer forwards information of dubious quality. Consider, for example, its assessment of “local weather” (climate, actually), which places Egypt in the world’s sixth highest position, substantially higher than that of Australia. Somehow I doubt that most expats would be so favorably disposed toward the climate of Cairo (although Alexandria would be a different matter). More important, ranking the “weather” of a climatically diverse country such as Australia is a meaningless exercise. Even Italy, which we are told has the world’s best weather for expats, has pronounced climatic variation. 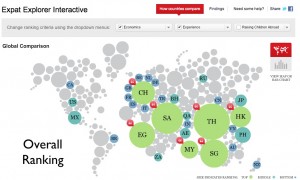 The Explorer’s composite “economics” and “experience” rankings, displayed on its home page, gives some curious data. Here we are told that Thailand and Saudi Arabia share the top position as the best places in the world for expats, whereas the Netherlands comes in last place. I would be interested to know if any readers find such information to be of any use.