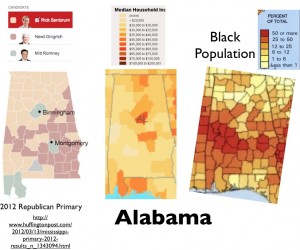 The recent Republican presidential primary in Alabama reveals some interesting geographical patterns. As the first two maps indicate, the so-called Establishment candidate, Mitt Romney, did well in the wealthier and more urban parts of the state. The one major exception here was Madison County in the far north, home of the George C. Marshall Space Flight Center, located near Huntsville. Surprisingly, relatively cosmopolitan Madison Country voted for Rick Santorum, the most socially conservative candidate.

The less urban and affluent countries of the state gave the majority of their votes either to Santorum or to Newt Gingrich. Here the best correlation is with race; countries with high percentages of African-Americans tended to vote for Gingrich. The actual voters in these counties were almost all White, as very few Black residents belong to the Republican Party. It has been suggested that White voters in such areas responded particularly well to Gingrich’s fierce denunciations of food stamps and other governmental welfare programs.