Geographical Patterns in the 2013 Swiss Election, Part I 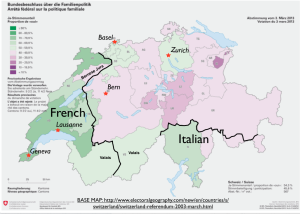 A three-part referendum held in Switzerland in early March received minimal press attention. Some media reports noted the passage of a measure to restrict executive compensation, but the family policy initiative was virtually ignored, as was the one on land-use planning. Today’s post briefly considers the family policy issue, whereas tomorrow’s will look at the executive compensation measure.

The Swiss election guide description of the family policy measure is not very specific:

Do you want the federal order of 15 June 2012 taken on family policy? The federal order would add an amendment to the federal constitution to require the federal government to take account of the needs of the family when performing its duties, and to work with the cantons to promote balance between family and work and to create more day-care facilities to complement schools.

Even though the measure sounds rather indistinct, it provoked strong reactions, with some parts of the country overwhelmingly favoring it, and others strongly opposing it. The general patterns are clear. I have modified the Electoral Politics map of the election results to highlight them. As can be seen on the first map, the French- and Italian-speaking areas of the country in general favored the initiative strongly, which received 54 percent of the vote nationwide. The more rural parts of the German-speaking zone, as well as the Romansh-speaking areas, opposed it. Such patterns would probably be even more clear-cut if the map showed voting behavior below the canton-level. I would not be surprised, for example, if the French-speaking part of Bern, Bernese Jura, actually voted for the measure, although the map would seeming indicate that it voted against it.  By the same token, I would not be surprised if the eastern, German-speaking portion of Valais actually voted against it. 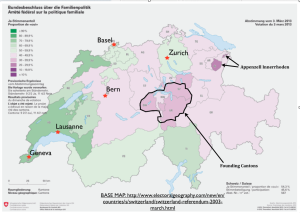 Generalization can also be made about the areas that voted strongly against the measure. The core “no” area in the center of the country corresponds closely with the original nucleolus of the Swiss state in the 14th century. The measure was most overwhelmingly rejected, however, in Appenzell Innerrhoden, a northeastern canton. Appenzell Innerrhoden is strongly conservative on social issues, not having given women the right to vote on local issues until 1991. The Wikipedia article on the canton includes some interesting information:

Somewhat before the early 2000s, the idyllic countryside of Appenzell Innerrhoden apparently became popular with nudists, and at the 2009 Landsgemeinde the canton’s residents voted to prohibit naked hiking. Violators would be fined. However nudists who appealed against their fines to the federal court have been reimbursed by the local authorities, as nudism is not a crime under Swiss federal law which takes precedence. It is common for cars rented in Switzerland to be registered in Appenzell Innerrhoden, and thus having license plates starting with “AI”, because of the reduced tax on cars in this canton.