French Wine Consumption and Other Intriguing Maps from Vintage Printables 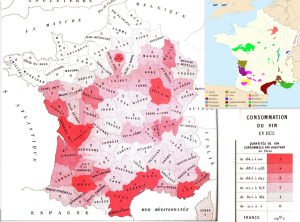 In conducting a simple internet search for geopolitical maps, I was surprised to see multiple returns of a map of French wine consumption in 1873. The map in question is found on a site called “Vintage Printable,” which aims to:

provide free, public domain/out-of-copyright images for you to print or download. Most of the images are vintage naturalist or scientific illustration, but there are loads of other images, too. Navigate with the gallery buttons above for many more images. Images are free, downloadable and printable. 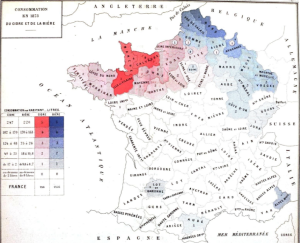 The site’s images are divided into a number of categories, including medieval, botanical, animal, and portrait. The maps are placed under the geopolitical label, even though most of them are not actually geopolitical in orientation.  Still, a number of handsome and useful maps are found on the site.

The French wine map of 1873 is one of a number of maps on Vintage Printable depicting alcohol consumption and abuse in the country at the time. As can be seen from the two maps presented here, France was strongly divided into wine-, cider-, and beer-drinking areas in the late 1800s. Wine consumption was correlated with wine production, as can be seen by looking at the Wikipedia inset map of wine production areas, which I added to the image, originally found here.