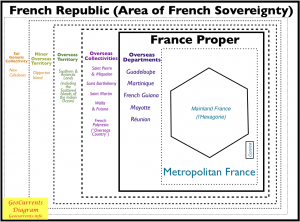 In diagramming the area of French sovereignty, I was not sure what to call the region constituted by the regular departments of France (both those in “Metropolitan France” and those located overseas); in the end I opted for “France Proper,” but it seems that there must be a better term. Some sources, including Wikipedia, place Corsica within “l’Hexagone,” but such a classification seems geometrically incorrect to me.

I am fond of the term “sui generis collectivity” for New Caledonia, which is scheduled to hold a referendum on independence between 2014 and 2018. New Caledonia now has a system of dual national symbols, with one set representing its position within the French Republic, and the other looking toward independence. As a result, I have placed it in the outermost layer of French sovereignty. I do not, however, expect independence to come easily to New Caledonia

Comments and criticisms are again welcome.