Cartography, Slovenian Nationalism, and Its Limitations 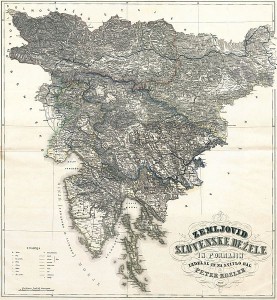 Cartography has long been an important tool for nationalism, as nationalist activists have used mapping to help establish the foundations of their national communities in the public mind. In the case of 19th century Slovenian nationalism, struggling against the Austrian Empire, cartography was particularly important; Peter Kozler’s famous map of the Slovene Lands, published in 1854, helped establish the idea of a separate Slovenian nation. The area covered by the map, not surprisingly, is rather larger than the area occupied by speakers of the Slovenian language. The map upset the Austrian authorities, who confiscated copies and briefly imprisoned Kozler.

Slovenian nationalism at the time should not, however, be stressed too much. I have some evidence of such limitations from my own family history; my Slovenian maternal grandfather, born in 1880, always considered himself an Austrian, despite the fact that he spoke no German and had never visited the area that now constitutes Austria (to this day, my elderly aunts call Slovenian “the Austrian language”). I always found this attitude perplexing, but the mystery was clarified yesterday in a talk in the Stanford History Department by Pieter Judson of Swarthmore College, entitled “Everyday Empire: Habsburg Central Europe in the Nineteenth Century.” Judson argued that ethnic-based nationalism in the region has been greatly exaggerated, and that many people, speaking a variety of languages, maintained firm loyalty to the Empire up to World War I. The talk proved somewhat controversial, but based in part on my own family history, I found it largely convincing.