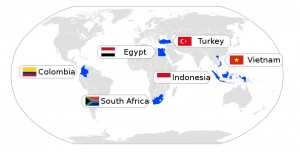 As explained in a recent GeoNote, the BRIC countries (Brazil, Russia, India, and China) have now been joined by the GUTS (Germany, United States, Turkey, and South Korea) in another effort to force together a number disparate countries that supposedly share key economic attributes. Add to the list of clever if misleading geo-economic acronyms the CIVETS: Colombia, Indonesia, Vietnam, Egypt, Turkey, and South Africa. Coined in 2009 Robert Ward of the Economist Intelligence Unit and further developed by former HSBC chief executive Michael Geoghegan, the term “CIVETS” refers to countries that are “considered to be very promising because they have reasonably sophisticated financial systems, controlled inflation, and soaring young populations.”

A November 2011 article in The Guardian outlines the CIVETS idea in some detail. The author claims that these countries “share a number of similarities, notably young populations.” Yet  many other states, such as Yemen and Niger, have even younger populations, yet would never be considered for such a list. But the CIVETS “are also perceived to have relatively sophisticated financial systems and to not be overly reliant on any one sector,” attributes that obviously do not apply to Yemen or Niger. Yet they could be said to apply to the Philippines, Panama, Pakistan, and a number of other countries not included among the CIVETS, due to other economic and political problems — and perhaps to the fact that any additions would ruin a cute acronym. In the end, such investment-oriented, geo-economic categories cannot be defined with any precision, and hence should be regarded as idiosyncratic.

I find the inclusion of Egypt on the CIVETS list especially odd, considering the country’s economic and political difficulties, which no doubt are deterring investment. But the CIVETS enthusiasts are evidently unshaken. As The Guardian reported late last year:

Egypt’s fast-growing ports on the Mediterranean and the Red Sea, joined by the Suez canal, are seen as potentially important trade hubs to connect Europe and Africa. The fund managers at HSBC believe the turmoil of the Arab spring, which tore through Egypt earlier this year, will not have a lasting effect on growth.

Despite HSBC’s confident conclusion, it does not seem warranted to regard Egypt’s “turmoil” as a thing of the past. As a result of such unrest, the Egyptian economy continues to suffer. Its foreign reserves have plummeted, and in early 2012 Standard & Poor’s lowered its credit rating from B+ to B. As a recent report in the Sydney Morning Herald put it,

GDP growth has fallen from 7.2 per cent in 2008 to a forecast of 1.5 per cent this year. And while official figures indicate 20 per cent of the population live below the poverty line, it is widely believed the real rate is as high as 40 per cent. ”Egypt’s problem is not just one of economic mismanagement but of endemic corruption,” said Elizabeth Iskander, a research fellow in Middle East politics at the German Institute of Global and Area Studies in Hamburg.