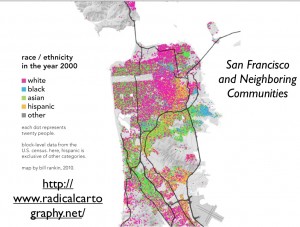 Another cartographic treasure-trove is found in Bill Rankin’s Radical Cartography. The site includes the most detailed demographic mapping that I have ever encountered. Rankin’s San Francisco Bay Area ethnicity map, a small portion of which I have posted here, is extraordinary: one dot for every 20 people! Areas of racial segregation and of racial mixing are clearly evident on the map. In northeastern San Francisco, for example, an expanded “Chinatown” appears as a heavily Asian area, whereas in the Richmond and Sunset districts of western San Francisco, a much more recent area of Asian settlement, Asians and Whites are fairly evenly interspersed. It would be very interesting to see how such patterns changed between the 2000 and the 2010 censuses.

Rankin’s site includes many unusual and innovative maps, and is well worth prolonged exploration.