And the Currency of Zimbabwe Is??? 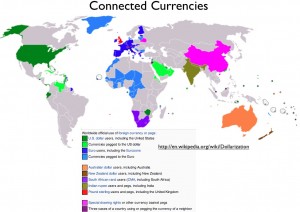 The Euro notwithstanding, sovereignty and currency ideally correspond: each independent county is generally associated with its own form of money. Yet in actuality, non-correspondence abounds. Many sovereign states use the currency of other countries, and quite a few dependent territories and non-recognized states print their own bills. Timor Leste, Panama, Ecuador, and the Federated States of Micronesia all use the US Dollar. The Euro, likewise, is used by several counties that do not even belong to the European Union, including Andorra, Montenegro, and Monaco. China, in contrast, is a single sovereign state with three currencies: the Chinese Renminbi, the Hong Kong Dollar, and the Macau Pataca. Many British dependencies maintain their own currencies that are exchangeable with the UK pound at par value, such as Gibraltar, but the British Virgin islands simply uses the U.S. dollar. Seven independent Caribbean counties share the East Caribbean dollar, which is pegged to the US dollar. In West Africa, eight independent countries use the West African CFA franc, which is of equal value to the Central African CFA franc, used by six other independent African countries. Both currencies are pegged to the Euro.

One country, Zimbabwe, seems to have given up on the idea of any “official” currency, whether foreign or domestic. Currently, the South African rand, Botswana pula, pound sterling, euro, and the United States dollar are all in use. In the future, Zimbabwe may reintroduce the Zimbabwean dollar, discontinued in 2009, but only if its economy stabilizes. This currency was destroyed by hyperinflation, which resulted in several episodes of redenomination. As the Wikipedia explains, “The third redenomination produced the “fourth dollar” (ZWL) which was worth 1 trillion ZWR (third dollar) and 10 septillion “first dollar” ZWD, so overall the ratio of the redenominations was 103 × 1010 × 1012 = 1025.”