A Global Decline in Religiosity? 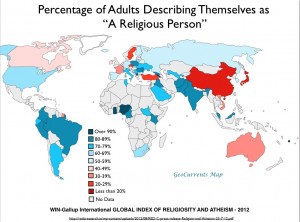 New global poll on religion and atheism by WIN-Gallup International has been receiving some attention. The poll, which covered 57 countries containing a solid majority of the world’s population, shows a clear decline in religiosity between 2005 and 2011. Globally, the number of adults claiming to be religious* evidently declined by 9 percent, with the number of atheists increasing by 3 percent.

The report itself highlights the especially striking decline of religious sentiments in Ireland, where the percentage claiming to be religious dropped from 69 to 47 of the adult population in this six-year span. Intriguingly, the number of self-professed atheists in Ireland dropped from 13% to 10% in the same period. These declines were made up by the large rise in the number of people claiming to be merely “non-religious,” which jumped from 25% to 44% of the Irish population. According to the WIN-Gallup data, Vietnam showed an even larger drop in the degree of religiosity during this period, from 53% to 30% of the adult population. The decline of religious belief in Ireland is often related to the sexual scandals of the Roman Catholic Church: those of Vietnam are much more difficult to explain. It is notable, however, that several other countries (Switzerland, France, South Africa) registered somewhat similar drops in religious belief.

Mapping the WIN-Gallup data reveals some interesting and unexpected patterns. Most striking is the low level of religious belief in Turkey; if the poll’s findings are to be accepted, 73 percent of Turks describe themselves as non-religious. The report itself finds such a situation difficult to credit, noting that:

Turkey … show[s] notable change since 2005. These changes are not from a faith to atheism but a shift from self- description of being ‘Religious’ to ‘Not Religious’. We have requested researchers … to investigate reasons which might explain this extra-ordinary shift.

I suspect that this mystery stems from changes in the manner in which the question is interpreted by respondents: even if one fully accepts the tenets of a given religion, one might still consider oneself to be, relatively speaking, “not a religious person” if one is regularly exposed to other people who are far more devout. Many signs indicate that marked religious devotion has been increasing among certain segments of the Turkish population, which may account for the seeming drop in religiosity for the population as a whole.

A similar slippage in the understanding of what it means to be “a religious person” may also explain the fairly low religiosity figures recorded for the Palestinian Territories (65%) and even Saudi Arabia (75%), areas that, like Turkey, show low levels of atheism. Surprisingly, however, the poll indicates that the level of atheism in Saudi Arabia is essentially the same at that of the United States: 5%.

More expected is the poll’s discovery of pronounced irreligion in China and Japan, with 47% of Chinese respondents claiming to be “convinced atheists” and only 14% marking themselves as religious. In Japan, the corresponding figures are 31% and 16%. But despite these figures for China, much evidence suggests that religious practices are increasing in many areas of the country.