Over the past few years, I have created a number of customizable base maps that I subsequently used to make the original GeoCurrents thematic maps that have been posted on this site (which are themselves now searchable by country and by topic). These customizable base maps were initially created by hand in Keynote, the Apple presentation program that competes with PowerPoint. Over the next several weeks, I will be fine-tuning all of these maps and then releasing them for downloading on this site in both Keynote and PowerPoint formats. Please free to use these customizable maps as you like. All that I would ask is that you retain the source note on the maps: GeoCurrents Customizable Base Map.

The customizable base maps were made by outlining the shapes of geopolitical units on basic maps held in the public domain. Once the outlines have been made, the resulting country- or province-shapes can be easily manipulated through a few simple clicks, allowing one to instantly change country color, boundary color and thickness, and so on. Keynote’s “shape” feature allows one to easily draw on the maps to show additional features. Shapes can also be dragged out of place and then placed back where they belong (to place shapes precisely, make sure that the “guidelines” in Keynote are turned off). Similar functionalities are available in the PowerPoint format, although I never personally use PowerPoint and hence I am a bit uncertain about what it actually allows. (But see these basic instructions How can these maps be manipulated in PowerPoint.) 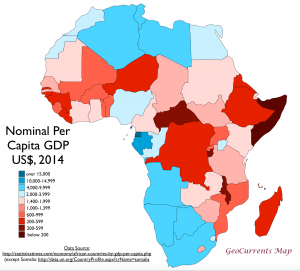 These maps can be profitably used in the classroom. If students are provided with a customizable map of a particular part of the world along with a data list pertaining to the same place, they can make their own thematic map. One example would be a map of African countries along with a list of African countries by per capita GDP. This exercise will help students learn the locations and shapes of the units in question (the countries of Africa in this case), and will allow them to grasp the patterns that they are mapping much more effectively than by merely looking at a map that someone else has made. Such a process is also useful for teaching students about selecting appropriate breaks in the data for effective map visualization, the use of different color schemes in mapping, and so on. One can also scatter the country shapes and then ask students to reassemble the map as a sort of game. Unfortunately, the shapes will not “click” into place, but the process still works well enough. 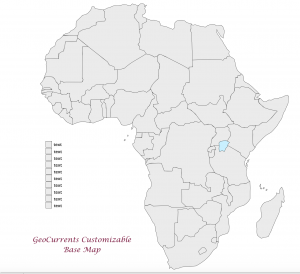 I am beginning this project by releasing a single map, that of the countries of Africa. Several different versions of this map are available in the PowerPoint and Keynote files provided below this text. The first is a simple outline map of the conventional countries of the region (although some insular African countries are excluded: Cape Verde, Seychelles, and Mauritius, as well as the French department of Reunion). Boxes with the 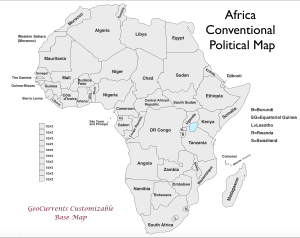 word “text” next to them can be used to construct a map key. The second is the same map but with the addition of country names. As the maps are all customizable, these names can be easily removed to (re)create the initial map. The third map includes two de facto changes to the basic political map that have not 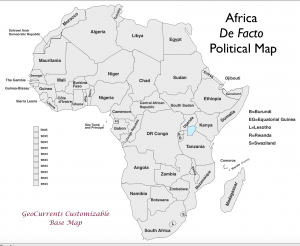 been recognized by the international community: the effective independence of Somaliland, and the extension of Morocco over most of Western Sahara, along with the virtual independence of the so-called Sahrawi Arab Democratic Republic in the remaining territory. The essentially collapsed states of Libya and (the rest of) Somalia still appear on this map as regular countries, but that could easily be changed by the user (such as by turning them to a darker shade of grey). The final map includes the base map that was used to create the customizable map, which is a physical map of Africa. This version of the map can be used in a variety of ways. If one wants to include rivers or certain other physical features on one’s own map, just click on the relevant countries, turn their “opacity” 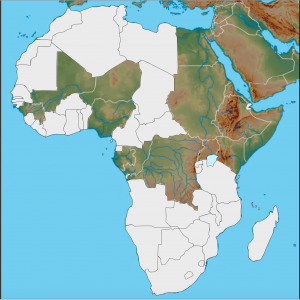 settings to zero, trace in the feature in question, and then click on the countries again and reset the opacity to 100 percent.

Please note that these maps have limited resolution. Small features, such as many of the islands on the Africa map, were by necessity reproduced as mere ovals or triangles. Boundary lines between countries, moreover, have not been perfectly traced out: as a result, boundary thickness is somewhat uneven. I personally find the end result aesthetically pleasing, as it gives these maps a somewhat soft appearance. Other users, however, may disagree. Users could, however, manually adjust the boundary lines to make them fit more precisely. I have done a lot of that work myself, but eventually 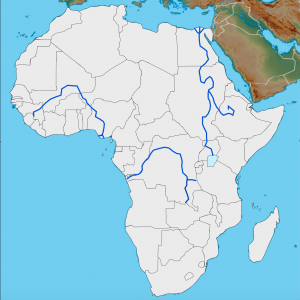 I give up and decide that the map in question is good enough.

As this might be confusing, I would be happy to answer any questions in the discussion forum.

Many more customizable maps will be released over the next few weeks. Additional maps can be found here: http://www.geocurrents.info/customizable-base-maps