The Human Development Index (HDI) is the most widely used method of assessing the overall level of human wellbeing across the planet. Today’s post examines HDI rankings in the demic and state-based frameworks. As is the case in regard to GDP measurements, the demic map portrays broad regional patterns of development relatively well, while missing a number of local particularities captured by the conventional map. But the state-based framework also misses local distinctions, those found at the sub-national level.

The HDI is composite statistic that takes into account longevity, educational attainment, and standard of living. The calculations used to construct the index are involved, as several separate measurements and sub-indexes are employed.* Whether the results adequately reflect “human development” is an open issue; like all other social indexes, the HDI has notable limitations and omissions. It treats “standard of living,” for example, as reducible to per capita GDP (PPP), which is simply not the case. The HDI also ignores gender equity and environmental cleanliness, which many observers regard as significant aspects of wellbeing. But all told, the HDI is still the most comprehensive and widely used measurement of human development, and therefore deserves extended consideration. 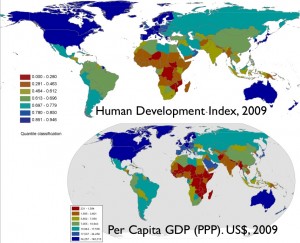 In general, global HDI maps track GDP maps relatively closely, as can be seen in the pair of state-based maps to the left. Wealthy countries, not surprisingly, tend to have high HDI numbers, whereas poor countries generally post low numbers.  Exception to this general rule can be instructive. On the quantile-based maps posted here, some oil-rich countries (Qatar, Equatorial Guinea) end up in significantly lower color categories in regard to HDI than they do in regard to GDP, reflecting the unbalanced nature of their development. A number of other countries, ranging from Kenya to Cambodia to Cuba to North Korea, on the other hand, fall into higher categories on the HDI map, reflecting in part successful educational programs. North Korea’s elevated HDI position, however, may point to statistical shortcomings and perhaps governmental manipulation of the data; certainly if a “malnutrition and food insecurity” component were added to the index, the position of North Korea would drop sharply.

As the demic HDI map posted above shows, exceptional areas also appear at the sub-national level. The most strikingly of such distinctions is found in southern South Asia. The region composed of Sri Lanka, the Maldives, and the Indian states of Tamil Nadu and Kerala ranks much higher in terms of human development than it does in regard to GDP. Sri Lanka and Kerala have long been noted for near universal literacy and impressive levels of public health, achievements realized despite meager economic resources. More recently, Tamil Nadu has made rapid progress in these same areas. Whereas in strictly economic terms, western India has the advantage, in terms of overall social development, southern India comes out ahead. North-central India, in contrast, lags well back in both domains.

In terms of human development, China appears much better off on the demic map than on the state-based map. As expected, coastal China scores higher than the rest of the country, but even the poorest interior regions come out relatively well.  Note that the region composed of Shanghai and Jiangsu falls into the highest color category on this map. But the position of China on the two HDI maps also reveals a problem with the underlying data. All regions of China fall into higher color categories on the demic map than China as a whole does on the state-based map. As the two maps apply the same numerical ranges to the same color categories, such results are a statistically impossible.** What this seeming error indicates is that data collected at the state and the sub-state levels are not necessarily comparable.

In global terms, the most important take-home message from the demic HDI map is the low standing of tropical Africa. Whereas virtually all parts of tropical Africa fall into the bottom two color categories, only one region outside of Africa does the same, that composed of Nepal and the Indian state of Bihar. The state-based map also captures the low level of human development in tropical Africa, but not so clearly. In terms of health and education, much of tropical Africa posts figures lower than what might be expected on the basis of per capita GDP. The HIV epidemic plays a significant role here, as does under-investment in education.

Finally, the demic HDI map reveals an unexpected pattern in Latin America. In the GDP maps, the region composed of Colombia, Venezuela, Panama, Costa Rica and Ecuador comes out ahead of its neighbor to the south, the region composed largely of northern Brazil, Peru, Bolivia, and Paraguay. On the HDI map, the positions are reversed. As the state-based map shows, the relatively high position of Peru in human development is a significant factor here. Intriguingly, Peru’s new government is emphasizing human development, arguing that the previous administration put economic growth above broader developmental considerations.

* In 2010, the UN revised its method of calculating HDI, broadening the educational sub-index. The current post uses the earlier for of the index, as new figures for most sub-national entities are not yet available.

** If anything, the average HDI figures for the demic regions of China should be slightly lower than the figure for China as a whole, as the Chinese provincial data used to make the demic map are from 2008 (the most recent we could find), whereas the figure for China as a whole is from 2009. As China posts slight developmental improvement annually, the overall figure for 2009 should be slightly higher than that from 2008.