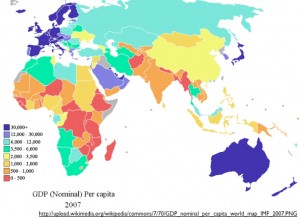 Maps and text from the forthcoming non-state-based (or “demic”) atlas will begin appearing in GeoCurrents next week. This week, the blog is presenting the work’s preface.

As noted in the previous post, countries are incomparable units, due to their vast variation in scale. Yet in tables and charts, Nauru, with ten thousand inhabitants living on eight square miles (twenty-one square kilometers), counts the same as China, with 1.3 billion inhabitants living on 3.7 million square miles (9.6 million square kilometers). Cartographic depictions are inherently less distorting, as they are spatially scaled. On most maps, small countries are appropriately small, although only those using equal-area projections maintain strict size proportionality. Miniscule states such as Nauru and Monaco thus tend to vanish from view. Unfortunately, mapmakers seem to be increasingly depicting micro-states with large circles, again privileging diplomatic pretense over geographical reality. Curiously, the Wikipedia GDP map posted here balloons Europe’s feudal remnants by several orders of magnitude, yet does not provide any information about them.

Although spatial imbalances are minimized on most maps, demographic disparities remain concealed. True, tiny countries usually have tiny populations, just as large ones tend to have many inhabitants, but the correlation is not strong. Confined to 268 square miles (694 square kilometers), Singapore’s five million inhabitants have little presence on standard maps, whereas Mongolia’s 2.8 million residents figure large in their 603,909 square-mile homeland (1,564,115 square kilometers). Unless one has a good sense of the distribution of human settlement across the world, maps of socio-economic development tend to mislead. On a world map of per capita GDP, wealthy Australia and Canada far overshadow India, even though India’s population is twenty-five times greater than that of the other two countries combined. In Africa, areas of relatively high per capita GDP are not as significant as they appear. Botswana, Namibia, and Gabon are sizable countries that boast elevated economic figures, but together they contain five and a half million people, roughly half the population of the destitute metropolis of Kinshasa in the Democratic Republic of Congo. 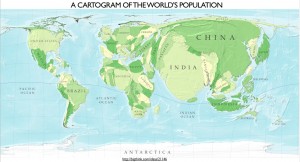 Mapmakers have devised a number of innovative techniques for depicting data in a more proportional manner. In demographic cartograms, the areas of geographically defined entities are expanded or reduced according to their populations. GDP figures are also well suited to cartogramic treatment, as both total economic output and output per capita can be depicted by a combination of size and color. The resulting image posted below nicely illustrates the concentration of economic power in a few parts of the world, as well as its near absence over a large swath of central Africa. 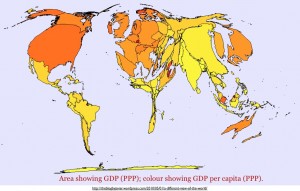 But for all of their powers of presentation, global cartograms conceal as much as they reveal. Areas with low numerical values in regard to whatever feature is being mapped tend to shrink into invisibility. On the example posted here, the Democratic Republic of Congo, a massive country of more than seventy million, can hardly be discerned. More to the point, cartograms of global development are almost always structured around sovereign states, and thus treat massive and highly differentiated countries as uniform entities. Note that this cartogram portrays Taiwan as if it really were part of China, rather than as the de facto sovereign state that it is; as a result, Taiwan appears smaller than Sri Lanka, even though its economy is almost an order of magnitude larger. (Why the cartographer depicts uninhabited Antarctica as having an economy roughly the size of Canada’s at a per capita level similar to that of India is anyone’s guess.) 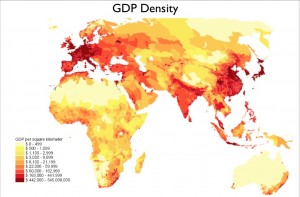 Another method of addressing disparities of scale when mapping economic production is encountered in the GDP density map, analyzed earlier in this blog by Andrew Lindford. Portraying “GDP per square kilometer” is an intriguing idea, but the effort fails, as the cartographer treats countries as undifferentiated wholes in regard to economic but not demographic data. The result is merely a map of settlement density in which the populations of wealthy countries are weighed more heavily than those of poor countries. Treating countries as economic uniformities again results in nonsense. Note how China’s Sichuan basin is shown as more economically productive per unit of area than its lower Yangtze region; observe how India’s impoverished lower Ganges Valley is depicted as more “economically dense” than its bustling greater Mumbai area.

The root problem is clear: basic patterns of social and economic development do not necessarily track the contours of political geography. To be sure, the immediate gap across national boundaries can be profound. When one moves from the U.S. state of New Mexico to the Mexican state of Chihuahua, per capita GDP drops three-fold, from $36,000 to $12,300. Yet the economic gaps within Mexico are more substantial than the chasm along its northern border. The southern Mexican state of Chiapas posts a per capita GDP figure (in PPP) of only $3,700, whereas Nuevo León in the north comes in at $16,300 and the central Federal District reaches $23,000, the latter figure not out of line with Mississippi’s $32,000. Similarly discrepant patterns are apparent across much the world. In socio-economic terms, southern Brazil is much more similar to Argentina than it is to northeastern Brazil, just as northern Italy is more akin to Switzerland than to southern Italy. A state-based system of comparison obscures all such internal differentiation.

If we are to devise more appropriate methods of portraying global social and economic disparities, we must move beyond the default framework of sovereign states and their dependent territories. This is not to claim that the governments and policies of independent countries are insignificant in determining which areas of the world are more prosperous or healthier than others. Nor is it to argue that conventional country-based maps of socio-economic development should be jettisoned, as they do serve a significant purpose. It is rather merely to insist that sovereign states are not the all-important, all-purpose units of global geography that they ubiquitously taken to be. As a result, the standard state-based map should be complemented by other modes of presentation. The current project is a first step in that direction.